P1681 - The Ethical Use of Placebo Control vs Active Comparator in a Clinical Trial to Treat Refractory Crohn’s Disease: A Case Report 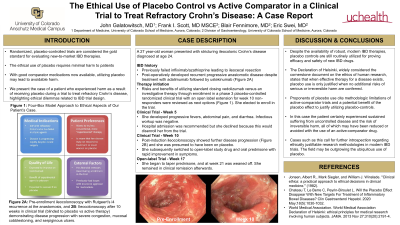 Introduction: Placebo-controlled randomized controlled trials are the gold standard for evaluating the safety and efficacy of new medications for inflammatory bowel disease (IBD). However, with the expansion of the IBD armamentarium, the use of placebo controls as opposed to active comparators is becoming increasingly controversial. We present the case of a patient who experienced harm as a result of receiving placebo during a trial to treat refractory Crohn’s disease, highlighting ethical dilemmas related to modern trial design in IBD.

Case Description/Methods: A 27 year-old woman presented with stricturing ileocolonic Crohn’s disease diagnosed at age 24. She had previously failed infliximab/azathioprine and underwent ileocecal resection. She subsequently developed recurrent progressive anastomotic disease despite treatment with adalimumab followed by ustekinumab (Figure 1). Vedolizumab and enrollment in a phase 3 placebo-controlled randomized clinical trial with a week 10 open label arm were reviewed as next options (Figure 2), and she elected to enroll in the trial. By week five of enrollment, she developed progressive fevers, abdominal pain, and diarrhea. Hospital admission was recommended but she declined because this would disenroll her from the trial. Week 10 ileocolonoscopy showed further disease progression (Figure 3) and she was presumed to have been on placebo. She subsequently switched to open-label study drug and oral prednisone with rapid improvement in symptoms. By week 17 she began to taper prednisone, and at week 21 was weaned off. She remained in clinical remission afterwards.

Discussion: Historically, the efficacy of new IBD treatments was assessed through placebo-controlled trials. However, numerous safe and effective therapies now exist. The Declaration of Helsinki states that, when effective therapy for a disease exists, placebo use is only justified when no additional risks of serious or irreversible harm are conferred. Many fields have migrated to active-comparator-based trial designs in order to minimize adverse events or deleterious effects of active disease, as demonstrated with the patient described here. While proponents of placebo use often cite methodologic limitations of active-comparator trials as well as a nebulous potential benefit of the placebo effect to justify continued placebo-controlled trial designs, cases such as this call for further introspection as to ethically justifiable research methodologies in modern IBD trials. 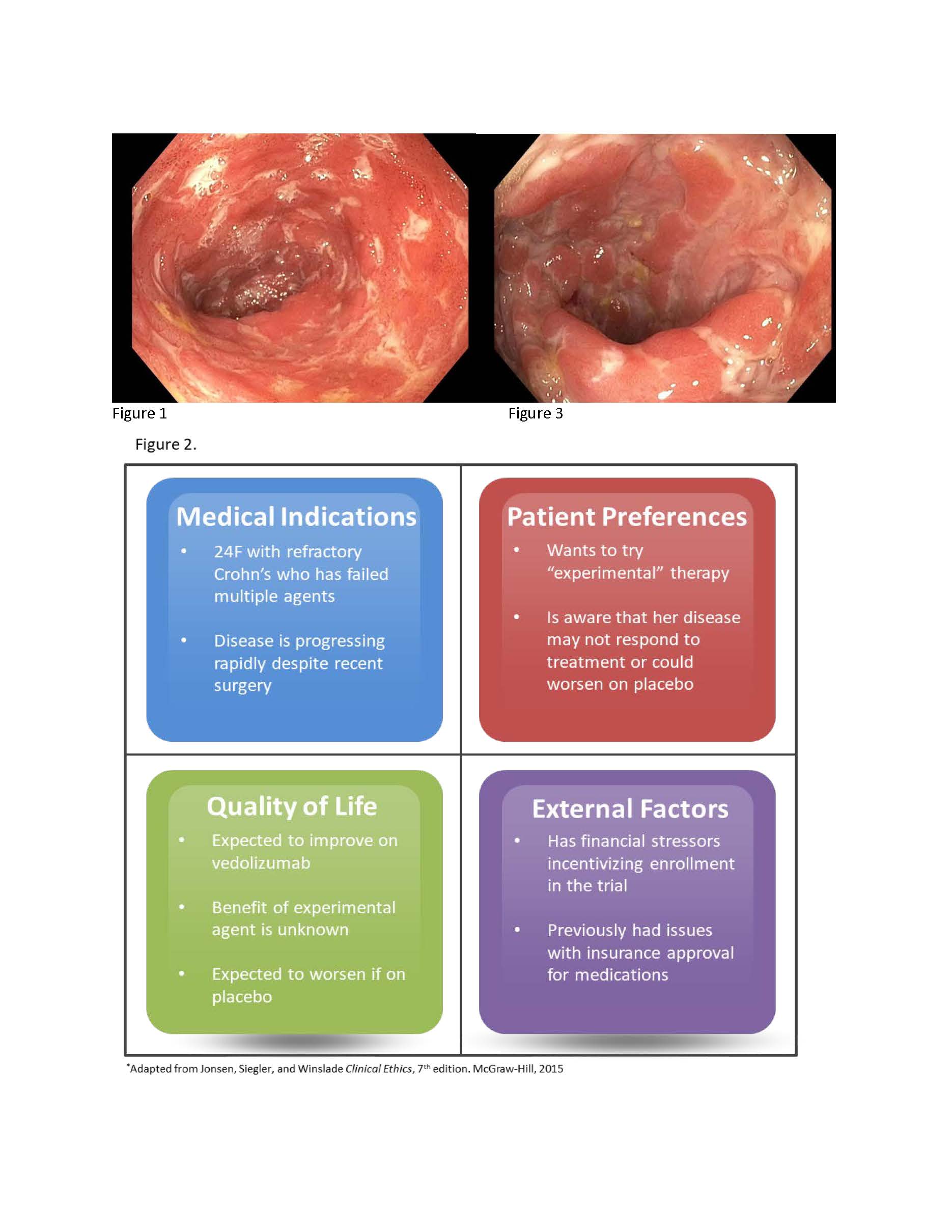