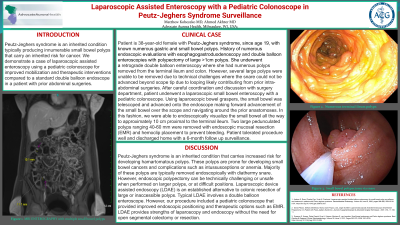 Case Description/Methods: Patient is 38-year-old female with Peutz-Jeghers syndrome since age 19 with known numerous small bowel polyps. History of numerous endoscopic evaluations with esophagogastroduodenoscopy and retrograde double balloon enteroscopies with polypectomy of large >1cm polyps. She underwent a retrograde double balloon enteroscopy where she had numerous polyps removed from the terminal ileum and colon. However, several large polyps were unable to be removed due to technical challenges where the snare was unable to be advanced beyond scope tip due to looping. Patient underwent a laparoscopic small bowel enteroscopy with a pediatric colonoscope. Using laparoscopic bowel graspers, the small bowel was telescoped and advanced onto the endoscope making forward advancement of the small bowel over the scope and navigating around the prior anastomoses. In this fashion, we were able to endoscopically visualize the small bowel all the way to approximately 10 cm proximal to the terminal ileum. Two large pedunculated polyps ranging 40-60 mm were removed with endoscopic mucosal resection (EMR) and hemoclip placement to prevent bleeding. Patient tolerated procedure well and discharged home with a 6-month follow up surveillance.

Discussion: Peutz-Jeghers syndrome is inherited condition that carries increased risk for developing hamartomatous polyps. These polyps are prone for developing small bowel cancers and complications such as intussusceptions or anemia. Majority of these polyps are typically removed endoscopically with diathermy snare. However, endoscopic polypectomy can be technically challenging or unsafe when performed on larger polyps or at difficult positions. Laparoscopic device assisted endoscopy (LDAE) is an established alternative to colonic resection of large or inaccessible polyps. Typical LDAE involves the use of a double balloon enteroscope. However, we demonstrate the use of a pediatric colonoscope in a patient with previous small bowel resections that provided improved endoscopic positioning and therapeutic management including EMR. LDAE provides strengths of laparoscopy and endoscopy without the need for open segmental colectomy or resection. 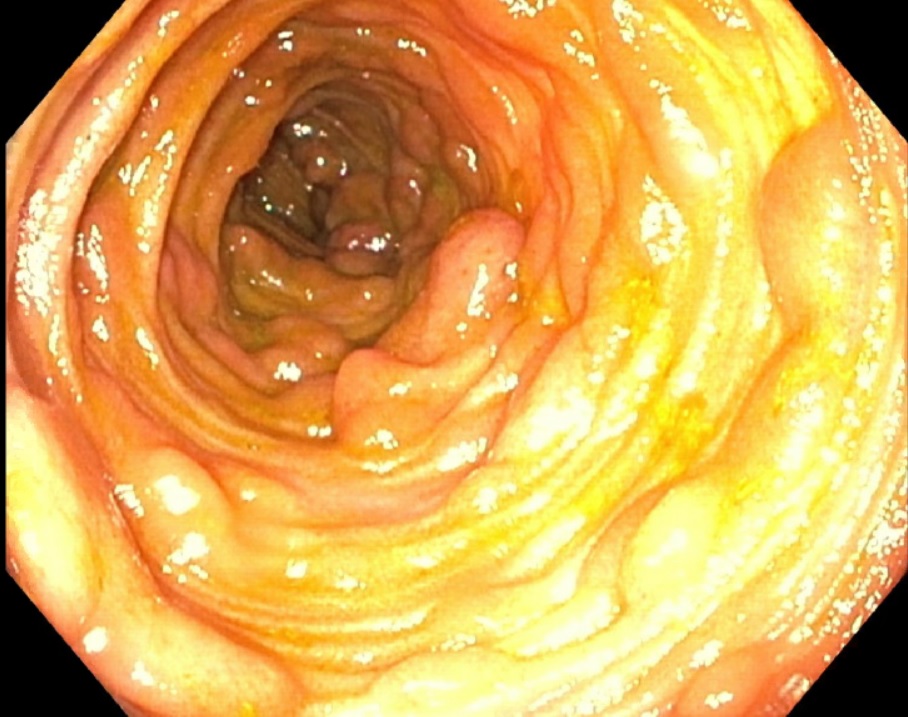