P1829 - Hyperfibrinolysis, a Rare Cause of Bleeding in Cirrhosis: A Case of Hemorrhagic Shock From a Spontaneous Retroperitoneal Bleed 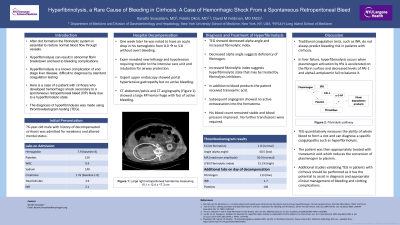 Introduction: After clot formation, the fibrinolytic system is essential to restore normal blood flow through vessels. Hyperfibrinolysis can result in abnormal fibrin breakdown and lead to bleeding complications. We present a case of a patient with cirrhosis who developed hemorrhagic shock secondary to a large spontaneous retroperitoneal (RP) bleed, which was due to a hyperfibrinolytic state. This is a known complication of end stage liver disease, difficult to diagnose by standard coagulation testing. Here, the diagnosis was made using thromboelastogram (TEG) testing.

Case Description/Methods: A 76-year-old male with history of decompensated cirrhosis was admitted for weakness and altered mental status. Initial labs were notable for hemoglobin 7.9, platelet count 129, international normalized ratio (INR) 2.1, and creatinine 1.76. One week later he had an acute drop in his hemoglobin from 8.0 to 5.3 without overt bleeding. He was lethargic and hypotensive, necessitating transfer to the intensive care unit and intubation for airway protection. Upper endoscopy showed portal hypertensive gastropathy but no active bleeding. Computed tomography (CT) of the abdomen and pelvis revealed a large retroperitoneal hematoma which measured 10.1 by 12.4 by 17.3 cm with foci of active bleeding (Figure 1). He had no history of recent trauma. Additional labs revealed platelets of 126, INR of 1.7, and fibrinogen level of 112. A TEG showed decreased alpha angle and increased fibrinolytic index percentage which indicated decreased clot formation and hyperfibrinolysis. He was treated with tranexamic acid as part of his resuscitation. No active extravasation was noted in the hematoma during angiogram. His blood count and blood pressure stabilized, and no further transfusions were required.

Discussion: Patients with cirrhosis are at risk of hypocoagulation or hypercoagulation but traditional coagulation tests, such as INR, do not predict bleeding risk in these patients. One mechanism of increased bleeding is hyperfibrinolysis, a complication of the cirrhotic coagulopathy which cannot be diagnosed with standard labs. Alternative testing such as TEG is being studied in the context of patients with cirrhosis, which has the potential to help guide diagnosis and clinical decision making and prevent unnecessary transfusion. Here, TEG assisted in the diagnosis and correct management of hyperfibrinolysis because it allowed for real time measure of clot dissolution. 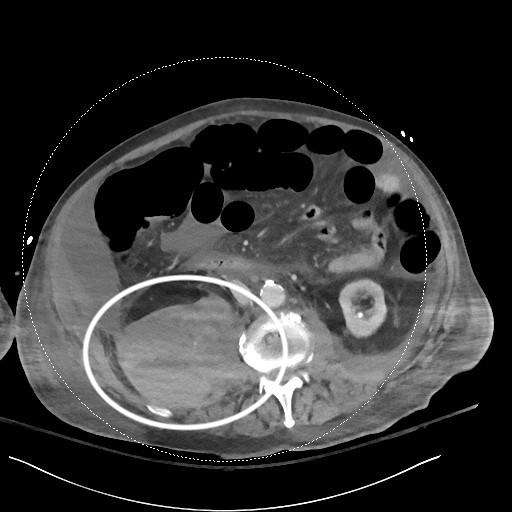