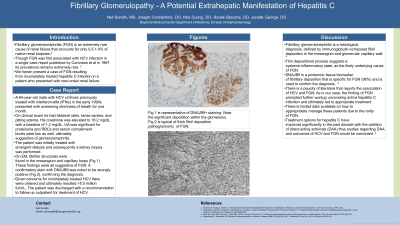 Introduction: Fibrillary glomerulonephritis (FGN) is an extremely rare cause of renal failure that accounts for only 0.5-1.4% of native renal biopsies. Though FGN was first associated with HCV infection in a single case report published by Coroneos et al in 1997, its prevalence remains extremely rare. We herein present a case of FGN resulting from incompletely treated hepatitis C infection in a patient who presented with new-onset renal failure.

Case Description/Methods: A 64-year-old male with HCV cirrhosis previously treated with interferon-alfa (IFNa) in the early 1990s presented with worsening shortness of breath for one month. On clinical exam he had bilateral rales, tense ascites, and pitting edema. His creatinine was elevated to 18.2 mg/dL with a baseline of 1.2 mg/dL. UA was significant for proteinuria and RBCs and serum complement levels were low as well, ultimately suggestive of glomerulonephritis. The patient was initially treated with emergent dialysis and subsequently a kidney biopsy was performed. On electron microscopy, fibrillar structures were found in the mesangium and capillary loops (Fig 1). These findings were all suggestive of fibrillar glomerulopathy. A confirmatory stain with DNAJB9 was noted to be strongly positive (Fig 2), confirming the diagnosis. Given the known history of HCV cirrhosis and a new diagnosis of FGN, there were concerns for incompletely treated HCV. HCV-RNA titers were sent which resulted >5.5 million IU/mL. The patient was later discharged from the hospital and recommendations were made to follow up for treatment of HCV outpatient.

Discussion: Fibrillary glomerulonephritis is a histological diagnosis, defined by immunoglobulin-composed fibril deposition in the mesangium and glomerular capillary wall. This depositional process suggests a systemic inflammatory state, as the likely underlying cause of FGN. DNAJB9 is a proteomic tissue biomarker of fibrillary deposition that is specific for FGN (98%) and is used to confirm the diagnosis. There is a paucity of literature that reports the association of HCV and FGN. As in our case, the finding of FGN prompted further workup uncovering active hepatitis C infection and ultimately led to appropriate treatment. There is limited data available on how to appropriately manage these patients due to the rarity of FGN. Treatment options for hepatitis C have improved significantly in the past decade with the addition of direct-acting antivirals (DAA) thus studies regarding DAA and outcomes of HCV and FGN would be warranted. 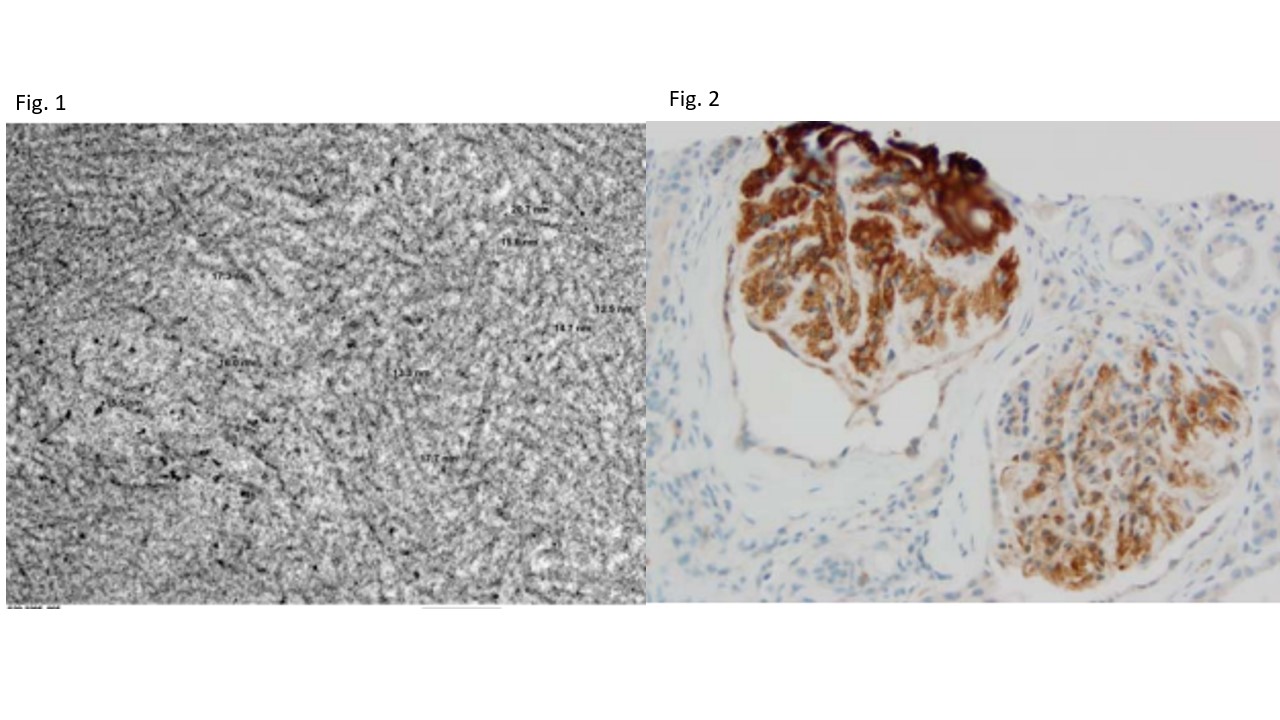