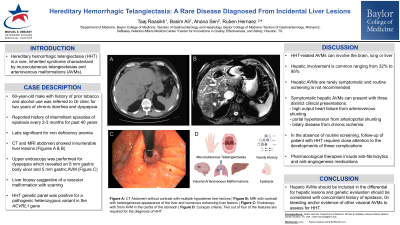 Introduction: Hereditary hemorrhagic telangiectasia (HHT) is a rare, autosomal dominant syndrome characterized by mucocutaneous telangiectasias and AVMs. Epistaxis and GI bleeding are the most common presenting features. HHT-related visceral AVMs have also been well-described and when identified without a prior diagnosis of HHT can present a significant diagnostic challenge.

Case Description/Methods: A 60-year-old male with prior history of prior tobacco and alcohol use was referred to GI clinic for two years of chronic diarrhea and dyspepsia. No unintentional weight loss although he reported intermittent episodes of epistaxis every 2-3 months for past 40 years. Physical examination and family history was unremarkable. CT A/P showed a heterogeneous liver with innumerable liver lesions. (Figure 1) An EGD was performed for dyspepsia which revealed an 8mm gastric body ulcer and biopsy negative for H.pylori. The patient’s diarrhea resolved with probiotics and changes to diet. Hepatology recommended a liver biopsy which was suggestive of an arteriovenous or vascular malformation with scarring. Follow up EGD revealed a healed stomach ulcer and a 5mm gastric AVM. Chart review revealed a prior CT chest with a small pulmonary vascular malformation. The patient was referred to genetics for evaluation of HHT. A HHT genetic panel was positive for a pathogenic heterozygous variant in the ACVRL1 gene and the diagnosis of HHT was confirmed.

Discussion: HHT is a clinically heterogenous disorder and diagnosis requires at least three of the following Curaçao criteria: epistaxis, mucocutaneous telangiectasias, visceral AVMs and family history of HHT. HHT-related AVMs can involve the brain, lung or liver. Hepatic involvement is common ranging from 32% up to 95%. Hepatic AVMs, are rarely symptomatic and routine screening is not recommended. Symptomatic hepatic AVMs can present with three distinct clinical presentations – high output heart failure from AV shunting, portal hypertension from arterioportal shunting and biliary disease from chronic ischemia. In the absence of routine screening, follow-up of these patients requires close attention to the development of these complications. In these cases, multi-phasic CT may be the preferred imaging modality. In conclusion, hepatic AVMs should be included in the differential for hepatic lesions and genetic evaluation should be considered with concomitant history of epistaxis, GI bleeding and/or evidence of other visceral AVMs. 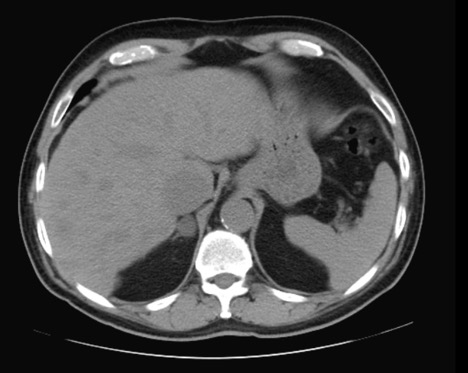