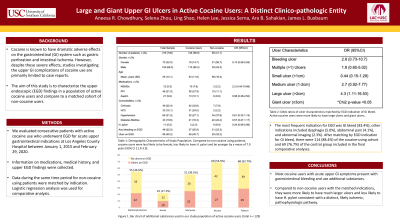 Introduction:
Cocaine is known to have adverse effects on the gastrointestinal (GI) system. However, studies investigating the upper GI complications of cocaine use are primarily limited to case reports. In this cohort we characterize the symptoms and upper endoscopic (EGD) findings of a population of active cocaine users and compare to a matched cohort of non-cocaine users.