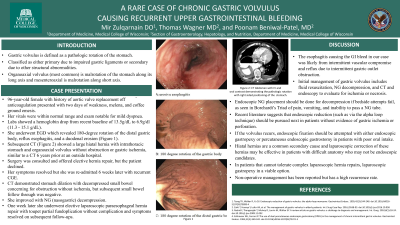 Introduction: Gastric volvulus is a rare condition that can present acutely or chronically and is classified as either primary due to impaired gastric ligaments or secondary due to other structural abnormalities. Organoaxial volvulus, in which the stomach is rotated along its long axis, is most common. Here we present a case of recurrent upper gastrointestinal (GI) bleeding secondary to a chronic organoaxial gastric volvulus.

Case Description/Methods: A 96 year old female with history of aortic valve replacement off anticoagulation presented with two days of weakness, melena, and coffee ground emesis (CGE). Her vitals were within normal range and exam notable for mild dyspnea. Labs showed a hemoglobin drop from recent baseline of 13.5g/dL to 6.9g/dl (11.3 - 15.1 g/dL). She underwent EGD which revealed 180 degree rotation of the distal gastric body, reflux esophagitis, and a duodenal erosion. Subsequent CT showed a large hiatal hernia with intrathoracic stomach and organoaxial volvulus without obstruction or gastric ischemia, similar to a CT 6 years prior at an outside hospital. Surgery was consulted and offered elective hernia repair but the patient declined. Her symptoms resolved but she was re-admitted 6 weeks later with recurrent CGE. CT demonstrated stomach dilation with decompressed small bowel concerning for obstruction without ischemia but small bowel follow through was negative. She improved with NG (nasogastric) decompression. One week later she underwent elective laparoscopic paraesophageal hernia repair with toupet partial fundoplication without complication and symptoms resolved on subsequent follow-ups.

Discussion: While acute gastric volvulus can rarely present with hematemesis, there is no literature describing this presentation in a chronic volvulus. The esophagitis causing the GI bleed in our case was likely from intermittent vascular compromise and reflux due to intermittent gastric outlet obstruction. Initial management of gastric volvulus includes fluid resuscitation, NG decompression, and CT to evaluate for ischemia or necrosis. Endoscopic NG placement should be done if bedside attempts fail, as seen in Borchardt’s Triad of pain, vomiting, and inability to pass a NG tube. Definitive management includes surgical repair of the anatomic defect with derotation and fixation. Endoscopic derotation via an alpha loop technique has also been described by Tsang et al as a temporizing measure prior to surgical repair or in patients who are not surgical candidates.