P2073 - Plexiform Fibromyxoma: A Perplexing Condition of the Stomach 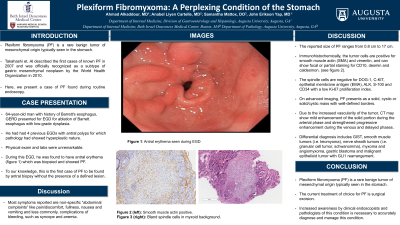 Introduction: Plexiform fibromyxoma (PF) is a rare, often benign tumor of mesenchymal origin typically found within the stomach. It features a plexiform cellular architecture of myofibroblasts encircled by a myxoid intercellular matrix with rich vasculature. Takahashi et. al described the first cases of known PF in 2007. It was officially recognized as a subtype of gastric mesenchymal neoplasm by the World Health Organization in 2010. Here, we present a case of PF detected during surveillance endoscopy.

Case Description/Methods: 64-year-old male presented for esophagogastroduodenoscopy (EGD) with ablation of Barrett esophagus with low-grade dysplasia. He had undergone 4 previous EGDs remarkable for hyperplastic antral polyps which were removed. His most recent physical exam and labs were unremarkable. During the EGD, he was found to have antral erythema with no clear discernable lesions (figure 1). Biopsies of the region were obtained which stained negative for cytokeratin AE1/AE3, S100, CKIT/CD34 (in lesional cells), and DOG1 while positive for smooth muscle actin (SMA), consistent with PF.

Discussion: The clinical presentation of PF is usually nonspecific. Commonly reported symptoms include abdominal pain, fullness, nausea, and vomiting, followed by complications of symptomatic anemia such as syncope.

Reported size of PF lesions range from 0.8 - 17.0 cm. Immunohistochemically, the tumor cells are positive for SMA and vimentin, and can show focal or partial staining for CD10, desmin and caldesmon. The spindle cells are negative for DOG-1, C-KIT, epithelial membrane antigen (EMA), ALK, S-100 and CD34 with a low Ki-67 proliferation index.

On CT or MRI imaging, PF appears as a solid, cystic, or solid/cystic mass with well-defined borders. Due to the increased vascularity of the tumor, CT with contrast may show mild enhancement of the solid portion during the arterial phase and strengthened progressive enhancement during the venous and delayed phases. Differential diagnoses for these tumors include gastrointestinal stromal tumors (GIST), leiomyoma, granular cell tumor, schwannoma, myxoma and angiomyxoma, gastric blastoma and malignant epithelioid tumor with GLI1 rearrangement. The current treatment of choice is surgical excision. Given the lack of clear lesion in our patient, further imaging will be obtained to attempt to determine margins. Increased awareness by endoscopists and pathologists of this condition is necessary for accurate diagnosis and management of this condition. 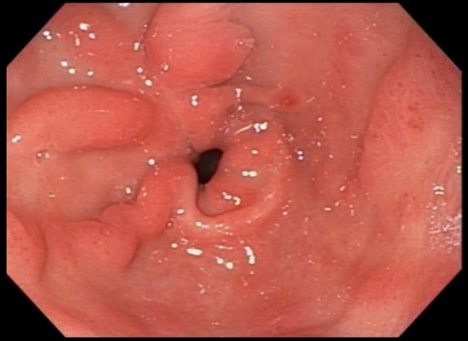