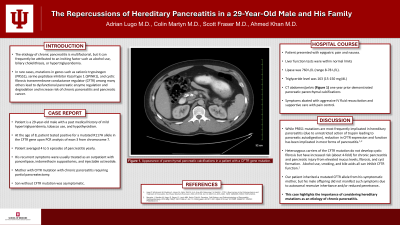 Introduction: The etiology of chronic pancreatitis is multifactorial, but it can frequently be attributed to an inciting factor such as alcohol use, biliary cholelithiasis, or hypertriglyceridemia. In rare cases, inherited mutations in cationic trypsinogen (PRSS1) can lead to hereditary pancreatitis (HP) and increase the risk of pancreatic cancer. In this report, we demonstrate the case of a 29-year-old male with hereditary pancreatitis who inherited a PRSS1 mutation from his mother.

Case Description/Methods: A 29-year-old male with a past medical history of hypertriglyceridemia, tobacco use, hypothyroidism, and hereditary pancreatitis presented with epigastric pain and nausea. Liver function tests were unremarkable. Lipase was 760 U/L (range 8-78 U/L). Triglyceride level was 163 (15-150 mg/dL). Computerized tomography imaging of the patient’s abdomen and pelvis from a year prior demonstrated parenchymal calcifications within the pancreas. The patient's symptoms abated within 4 days of aggressive IV fluid resuscitation and supportive care. Regarding his history, at the age of 8, the patient was found to possess a mutated R117H allele in the PRSS1 gene upon PCR analysis of exon 3 from chromosome 7. His mother carried this gene and underwent pancreatectomy for recurrent pancreatitis and numerous pancreatic parenchymal calcifications. In adulthood, the patient has averaged 4 to 5 episodes of pancreatitis annually and has used pancrelipase, indomethacin suppositories and injectable octreotide for symptom control. Of note, the patient’s son did not possess the PRSS1 gene mutation.

Discussion: Mutations in the PRSS1 gene are associated with hereditary pancreatitis due to unrestricted action of trypsin which leads to pancreatic autodigestion. Our patient inherited a mutated PRSS1 allele from his symptomatic mother, but his male offspring did not manifest such symptoms. The literature shows that penetrance of the PRSS1 gene ranges between 40-90%, which implies a high probability of passing these alleles to offspring. More importantly, patients with HP tend to also be carriers of the SPINK1 and CFTR mutations, which are linked to pancreatic cancer and cystic fibrosis, respectively. This case report highlights the importance of genetic testing as mutations can lead to both a perpetual cycle of pancreatitis and increase the risk of developing pancreatic cancer. Proper anticipation can prompt the use of pancreatic enzyme supplementation, octreotide, and indomethacin to help control symptoms and reduce chronicity. 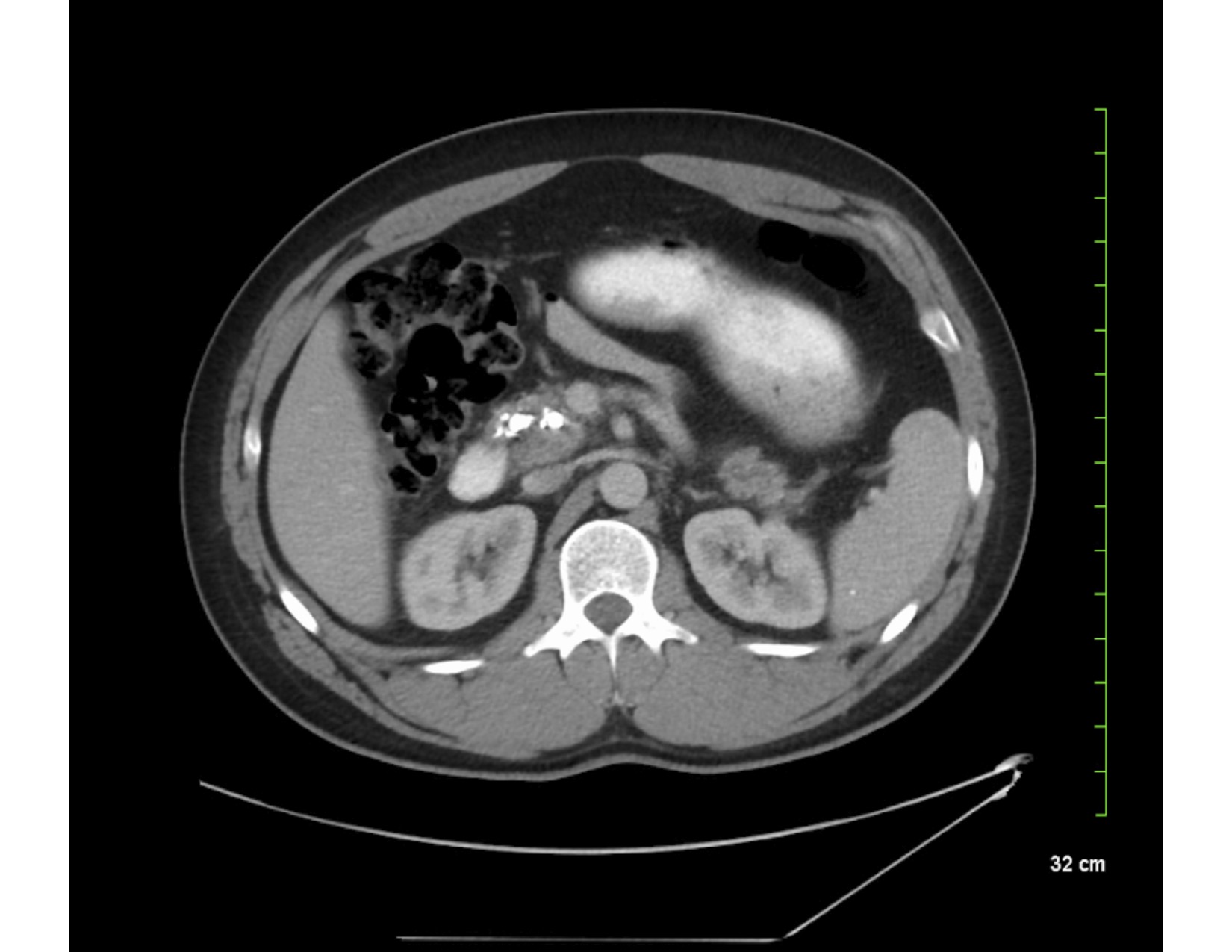