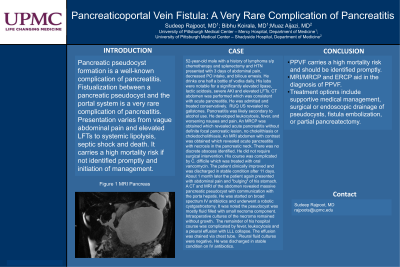 Introduction: Pancreatic pseudocyst formation is a well-known complication of pancreatitis. Fistualization between a pancreatic pseudocyst and the portal system is a very rare complication of pancreatitis. Presentation varies from vague abdominal pain and elevated LFTs to systemic lipolysis, septic shock and death. It carries a high mortality risk if not identified promptly and managed.

Case Description/Methods: 52-year-old male with a history of lymphoma s/p chemotherapy and splenectomy and HTN presented with 3 days of abdominal pain, decreased PO intake, and bilious emesis. He drinks half a bottle of vodka daily. His labs were notable for a significantly elevated lipase, lactic acidosis, severe AKI and elevated LFTs. CT abdomen was performed which was consistent with acute pancreatitis. He was admitted and treated conservatively. RUQ US revealed no gallstones. Pancreatitis was likely secondary to alcohol use. During this hospitalization he developed leukocytosis, fever, and worsening nausea and pain. An MRCP was obtained which revealed acute pancreatitis without definite focal pancreatic lesion, no cholelithiasis or choledocholithiasis. An MRI abdomen with contrast was obtained which revealed acute pancreatitis with necrosis in the pancreatic neck. There was no discrete abscess identified. He did not require surgical intervention. His course was complicated by C. difficile which was treated with oral vancomycin. The patient clinically improved and was discharged in stable condition after 11 days.

About 1 month later the patient again presented with abdominal pain and "bulging" of his stomach. A CT and MRI of the abdomen revealed a massive pancreatic pseudocyst with communication with the porta hepatis. He was started on broad spectrum IV antibiotics and underwent a robotic cystgastrostomy. It was noted the pseudocyst was mostly fluid filled with small necroma component. Intraoperative cultures of the necroma remained without growth. The remainder of his hospital course was complicated by fever, leukocytosis and a pleural effusion with LLL collapse. The effusion was drained via chest tube. Pleural fluid cultures were negative. He was discharged in stable condition on IV antibiotics.

Discussion: PPVF carries a high mortality risk and should be identified promptly. 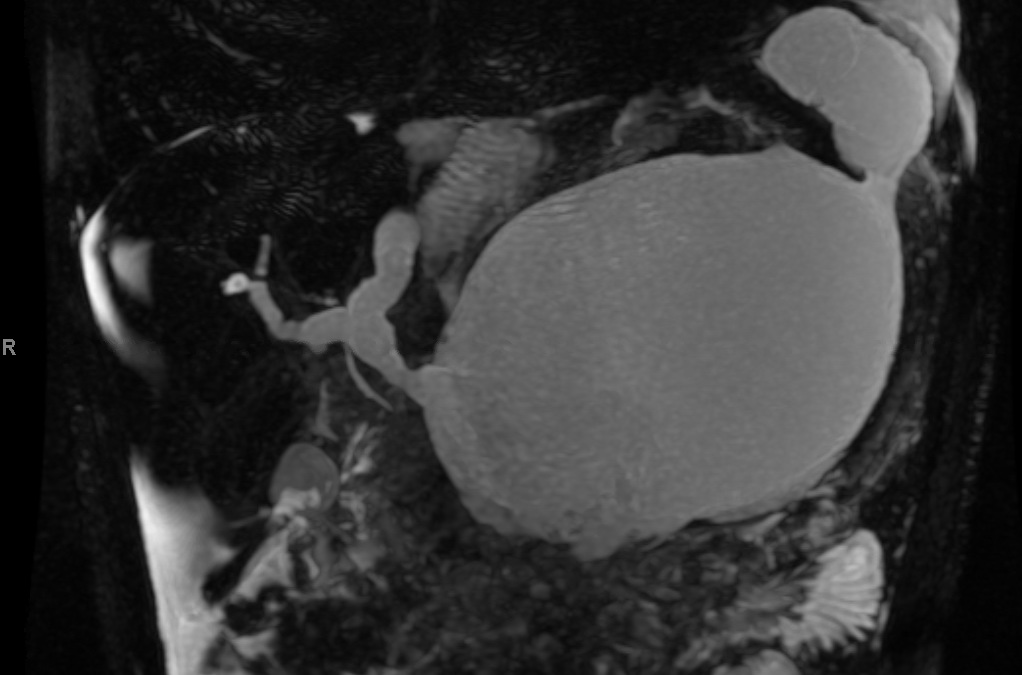 Figure: Multiloculated pseudocyst with fingerlike extensions into the porta hepatis.