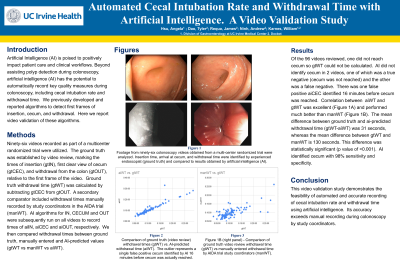 Methods: Ninety-six deidentified videos recorded as part of a multicenter randomized trial were utilized. The ground truth was established by video review, marking the times of insertion (gtIN), first clear view of cecum (gtCEC), and withdrawal from the colon (gtOUT), relative to the first frame of the video. Ground truth withdrawal time (gtWT) was calculated by subtracting gtCEC from gtOUT. A secondary comparator included withdrawal times manually recorded by study coordinators in the AIDA trial (manWT). AI algorithms for IN, CECUM and OUT were subsequently run on all videos to record times of aiIN, aiCEC and aiOUT, respectively. We then compared withdrawal times between ground truth, manually entered and AI-predicted values (gtWT vs manWT vs aiWT).

Results: Of the 96 videos reviewed, one did not reach cecum so gtWT could not be calculated. AI did not identify cecum in 2 videos, one of which was a true negative (cecum was not reached) and the other was a false negative. There was one false positive aiCEC identified 16 minutes before cecum was reached. Correlation between aiWT and gtWT was excellent (Figure 1A), and performed much better than manWT (Figure 1B). The mean difference between ground truth and ai-predicted withdrawal time (gtWT-aiWT) was 31 seconds, whereas the mean difference between gtWT and manWT is 130 seconds. This difference was statistically significant (p value of < 0.001). AI identified cecum with 98% sensitivity and specificity.