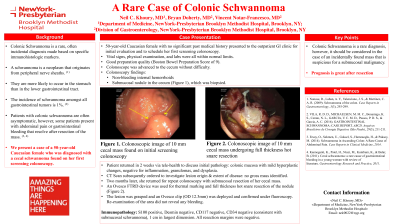 Introduction: A schwannoma is a neoplasm that originates from peripheral nerve sheaths. The incidence of schwannoma amongst all gastrointestinal tumors is 1%. These cases are more commonly seen in the stomach, however, multiple case reports have reported colonic schwannomas as well. Patients with colonic schwannoma are often asymptomatic, however, some patients present with abdominal pain or gastrointestinal bleeding that resolve after resection of the mass.

Case Description/Methods: 50-year-old Caucasian female with no significant past medical history presented to the outpatient gastroenterology clinic for initial evaluation and to schedule her first screening colonoscopy. Vital signs, physical examination, and labs were within normal limits. The screening colonoscopy was completed with good preparation quality (Boston Bowel Preparation Score of 9), and revealed non-bleeding internal hemorrhoids and a submucosal nodule in the cecum (Figure 1), which was biopsied. The patient was discharged and was scheduled for a telehealth visit in 2 weeks to review pathology results. The pathology report revealed colonic mucosa with mild hyperplastic changes, negative for inflammation, granulomas, and dysplasia. A Computed Tomography (CT) of the abdomen and pelvis with oral and intravenous (IV) contrast was ordered in attempt to evaluate location and extent of the lesion. No gross mass was identified on the scan. Two months later, the patient returned for repeat colonoscopy with submucosal resection of her cecal mass. An Ovesco FTDR device was used for thermal marking and full thickness hot snare resection of the nodule. The lesion was grasped and an Ovesco clip (OD 12.3mm) was deployed and confirmed under fluoroscopy. Immunopathology studies of the resected nodule were as follows: S100 positive, Desmin negative, CD117 negative, CD34 negative, consistent with a submucosal schwannoma, 1 cm in largest dimension. All resection margins were negative.

Discussion: Colonic Schwannoma is a rare diagnosis, however, one to keep in mind when considering a differential diagnosis for a colonic mass found on screening colonoscopy, especially if the mass may appear suspicious for a submucosal malignancy. Clinicopathologic and immunohistochemical reviews of gastrointestinal schwannomas have shown that these neoplasms are much more commonly found in the stomach than in the colon, however, no matter where they are found, prognosis is great, as multiple studies have described cohorts with no recurrence of malignancy. 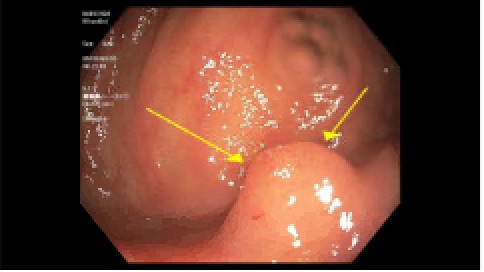