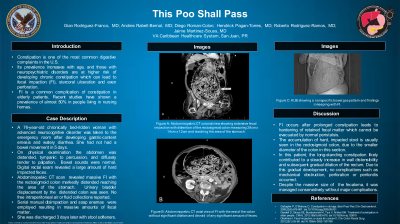 Introduction: Constipation in the elderly is common but often overlooked. It has a major impact on healthcare costs due to the amounts of office visits, specialty referrals and hospital admissions associated to this condition. Patients with cognitive impairment are at a higher risk of developing chronic constipation which can lead to fecal impaction (FI), stercoral ulceration and even perforation.

Case Description/Methods: A 76-year-old chronically bed-ridden woman with advanced neurocognitive disorder was taken to the emergency room after developing gastric-content emesis and watery diarrhea. Her caretaker referred the patient had been experiencing constipation which had gradually gotten worse since becoming bedridden and was managed with plum juice and water enemas. Despite home remedies, the patient stopped having bowel movements 5 days prior to presentation. On physical examination, the patient had a markedly distended abdomen which was dull to percussion on all quadrants and diffusely tender to palpation. Bowel sounds were normal. Labs revealed stable hemoglobin levels and no leukocytosis. An Abdominopelvic CT scan demonstrated FI with the rectosigmoid colon markedly distended and reaching the area of the stomach. The distended segment measured 29cm x 14cm x 12cm. Displacement of the urinary bladder by the rectum and left-sided hydronephrosis secondary to compression of the ureter by the rectosigmoid colon was seen. No free intraperitoneal air or fluid collections reported. As a result, manual disimpaction was performed resulting in massive amounts of fecal matter. Multiple soft, brown bowel movements were reported in the 24-hours following. Soap enemas and stool softeners were provided daily. She was discharged three days later in view of clinical improvement and resolution of severe FI.

Discussion: FI is a severe bowel condition characterized by obstruction in the anal canal due to hard, dry masses of stool known as fecalomas. It often presents in elderly, bedridden patients with a wide variety of symptoms including overflow diarrhea, constipation, nausea, or vomiting. In severe cases, it may present with increased rectal distention such as our case. FI likely caused a persistent increase in wall distensibility and subsequent gradual dilation of the rectum. Due to its gradual development, no complications such as mechanical obstruction, perforation or peritonitis occurred. Despite the massive size of our patient’s fecaloma, the fecal mass was managed conservatively without major complications. 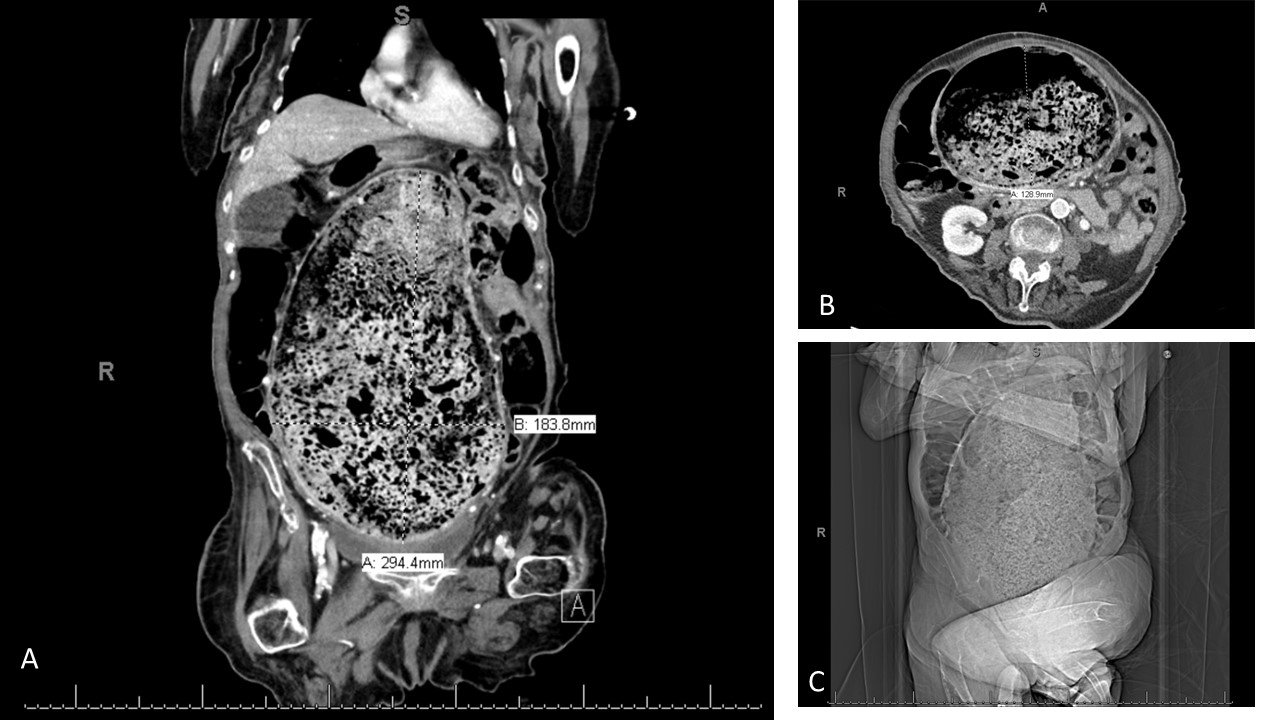