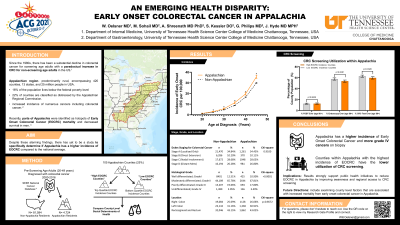 Introduction: Appalachia is a region that is predominantly rural and encompasses 420 counties in the eastern United States. This region is marked by significant health disparities, poverty, and low life expectancy. Studies have shown that Appalachia has a higher overall incidence of colon and rectal cancer. Recently, parts of Appalachia were identified as hotspots of early-onset colorectal cancer (EOCRC) mortality and decreased survival in men. Nevertheless, regional rates and characteristics of EOCRC for Appalachia are not been well described.

Methods: This retrospective analysis of 86,318 people used the National Cancer Institute (NCI)’s Surveillance, Epidemiology, and End Results (SEER) Program to determine the incidence of EOCRC for non-screening age adults (20 to 49 years) in the United States. The SEER 21 database covers 37% of the US population, including 25% of Appalachian counties. Appalachian Regional Commission’s county designation was used to determine cohort inclusion: 4,727 patients in Appalachian cohort and 81,594 in non-Appalachian cohort. Analysis was conducted using SEER*Stat to calculate rate ratios and 95% CI. Cancer staging and location was compared using Chi-square.

Discussion: Appalachia is at-risk for early onset colorectal cancer with significantly increased incidence. This is the first population-based study to describe EOCRC in Appalachia. In 2020, the USPTF began revising the screening guidelines for colon cancer. The current proposal suggests lowering the screening age to 45 years, aligning with the current recommendations by both the American Cancer Society and the American College of Gastroenterology. This study suggests that Appalachia, with its increased incidence of CRC in non-screening age adults, will likely benefit from the new screening age of 45. Furthermore, we advocate further tailoring of guidelines towards at risk geographic areas in addition to demographic populations as is currently the case for those with family history. 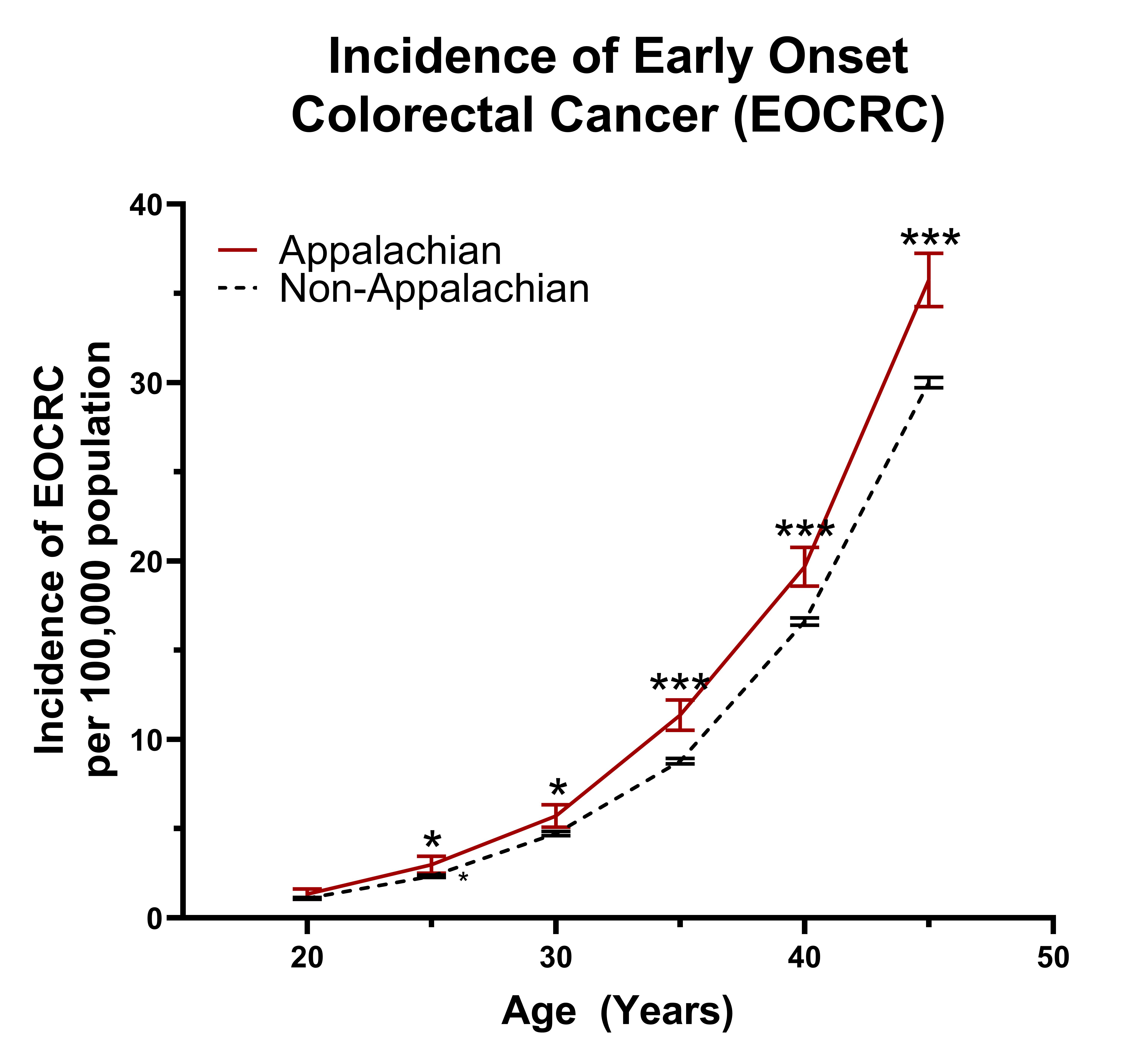 Figure: Figure 1: There is an increased incidence of early onset colorectal cancer in Appalachia compared to the US population. Y-error bars represent 95% confidence intervals. Asterix (*) represents age groups that were found to have a significant difference in the incidence of EOCRC between Appalachian and Non-Appalachian Cohorts.