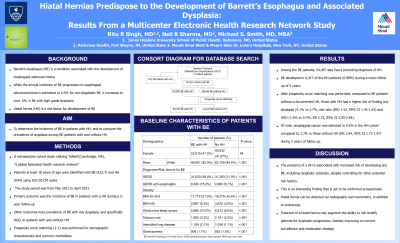 Introduction: Barrett’s esophagus (BE) is a premalignant condition for the development of esophageal adenocarcinoma (EAC). While the annual risk of BE progression to EAC is estimated at 0.3% for non-dysplastic BE, it increases to over 6% in patients with high grade dysplasia (HGD). Hiatal hernia (HH) is one risk factor for development of BE; however, there is limited data on the relationship between the presence of HH and dysplasia within BE. The aim of this study was to determine the incidence of BE in patients with HH and to compare the prevalence of dysplasia among BE patients with and without HH.

Methods: A population-based, multi-center, retrospective cohort study was conducted utilizing TriNetX (Cambridge, MA), “a global federated health research network” of 51 healthcare organizations. The 10-year study period was 5/2011 to 5/2021. Patients ≥18 years were identified with BE (K22.7) and HH (K44) using ICD-10-CM codes. The primary outcome was the incidence of BE in patients with HH during a 5-year follow-up. Other outcomes were the presence of BE with any dysplasia, and specifically HGD, in patients with and without HH. Propensity score matching was done for baseline patient characteristics and common risk factors associated with BE as part of the analysis.

Discussion: This study shows that the presence of a HH is associated with an increased risk of developing any BE, including dysplastic subtypes, despite controlling for other potential risk factors. This is an interesting finding that is yet to be confirmed prospectively. HH can be detected via radiography and manometry, in addition to endoscopy. Its presence may augment the ability to risk-stratify patients for dysplastic progression, thereby improving current surveillance and eradication strategy.
SD standard deviation, BE Barrett’s Esophagus, HH hiatal hernia, GERD gastroesophageal reflux disease, BMI body mass index, OSA obstructive sleep apnea, ILD interstitial lung disease.
Table: Table 1. Demographic and Clinical Characteristics of Patients with Barrett’s Esophagus before and after Propensity Score Matching.