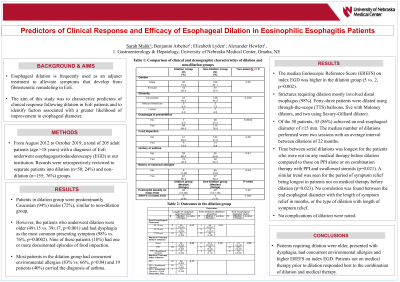 Introduction: Esophageal dilation is frequently used as an adjunct treatment to alleviate symptoms that develop from fibrostenotic remodelling in EoE. The aim of this study was to characterize predictors of clinical response following dilation in EoE patients and to identify factors associated with a greater likelihood of improvement in esophageal diameter.

Methods: From August 2012 to October 2019, a total of 205 adult patients (age >18 years) with a diagnosis of EoE underwent esophagogastroduodenoscopy (EGD) at our institution. Records were retrospectively reviewed to separate patients into dilation (n=50; 24%) and non-dilation (n=155; 76%) groups.

Results: Patients in dilation group were predominantly Caucasian (94%) males (72%), similar to non-dilation group. However, the patients who underwent dilation were older (49±15 vs. 39±17, p=0.001) and had dysphagia as the most common presenting symptom (98% vs. 76%, p=0.0002). Nine of these patients (18%) had one or more documented episodes of food impaction. Most patients in the dilation group had concurrent environmental allergies (83% vs. 66%, p=0.04) and 19 patients (40%) carried the diagnosis of asthma. The median Endoscopic Reference Score (EREFS) on index EGD was higher in the dilation group (5 vs. 2, p=0.002). Strictures requiring dilation mostly involved distal esophagus (98%). Forty-three patients were dilated using through-the-scope (TTS) balloons, five with Maloney dilators, and two using Savary-Gilliard dilator). Of the 50 patients, 43 (86%) achieved an end-esophageal diameter of ≥15 mm. The median number of dilations performed were two sessions with an average interval between dilations of 22 months. Time between serial dilations was longest for the patients who were not on any medical therapy before dilation compared to those on PPI alone or on combination therapy with PPI and swallowed steroids (p=0.021). A similar trend was seen for the period of symptom relief being longest in patients not on medical therapy before dilation (p=0.023). No correlation was found between the end esophageal diameter with the length of symptom relief in months, or the type of dilation with length of symptom relief. No complications of dilation were noted.

Discussion: Patients requiring dilation were older, presented with dysphagia, had concurrent environmental allergies and higher EREFS on index EGD. Patients not on medical therapy prior to dilation responded best to the combination of dilation and medical therapy.

Table: Outcomes in the dilation group