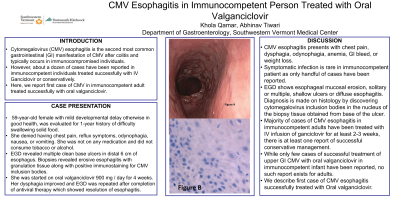 Case Description/Methods: 59-year-old female with mild developmental delay otherwise in good health, was evaluated for 1-year history of difficulty swallowing solid food. She denied having chest pain, reflux symptoms, odynophagia, nausea, or vomiting. She was not on any medication and did not consume tobacco or alcohol. EGD revealed multiple clean base ulcers in distal 6 cm of esophagus. Biopsies revealed erosive esophagitis with granulation tissue along with positive immunostaining for CMV inclusion bodies. She was started on oral valganciclovir 900 mg per day for 4 weeks. Her dysphagia improved and EGD was repeated after completion of antiviral therapy which showed resolution of esophagitis.

Discussion: CMV esophagitis presents with chest pain, dysphagia, odynophagia, anemia, GI bleed, or weight loss. Symptomatic infection is rare in immunocompetent patient as only handful of cases have been reported. EGD shows esophageal mucosal erosion, solitary or multiple, shallow ulcers or diffuse esophagitis. Diagnosis is made on histology by discovering cytomegalovirus inclusion bodies in the nucleus of the biopsy tissue obtained from base of the ulcer. Majority of cases of CMV esophagitis in immunocompetent adults have been treated with IV infusion of ganciclovir for at least 2-3 weeks, there is at least one report of successful conservative management. While only few cases of successful treatment of upper GI CMV with oral valganciclovir in immunocompetent infant have been reported, no such report exists for adults. We describe first case of CMV esophagitis successfully treated with Oral valganciclovir.