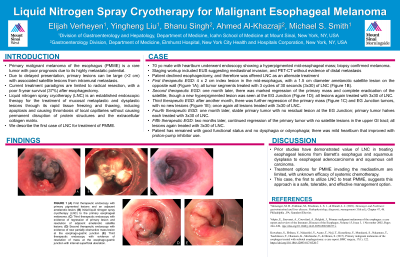 Introduction: Primary malignant melanoma of the esophagus (PMME) is a rare tumor with poor prognosis due to its highly metastatic potential. Due to delayed presentation, primary lesions can be large ( >2 cm) with associated satellite lesions from intramural metastasis. Current treatment paradigms are limited to radical resection, with poor 5-year survival (37%) after esophagectomy. Liquid nitrogen spray cryotherapy (LNC) is an established endoscopic therapy for the treatment of mucosal metaplastic and dysplastic lesions through its rapid tissue freezing and thawing, inducing apoptosis and causing thrombosis of local capillaries without causing permanent disruption of protein structures and the extracellular collagen matrix. We describe the first case of cryoablation for the treatment of PMME.

Case Description/Methods: A 70-year old male with heartburn underwent endoscopy showing a hyperpigmented mid-esophageal mass (Figure 1A), with endoscopic ultrasound suggesting mediastinal invasion. Biopsy confirmed a melanoma. Whole body PET-CT demonstrated an isolated soft tissue esophageal mass without metastasis. Given the patient’s clear opposition to surgery, he was offered LNC as an alternative. At the first LNC procedure, an additional amelanotic satellite lesion was noted opposite the primary lesion (Figure 1B); all tumors were treated with three cycles of 30 seconds of LNC (Figure 1C). The patient returned a month later, at which time there was marked regression of the primary mass and complete eradication of the satellite (Figure 1D); however, a new hyperpigmented lesion was seen at the esophago-gastric junction (EGJ). Again, all lesions were treated with three cycles of 30 seconds of LNC. Endoscopy a month later revealed further regression of the primary mass and EGJ tumor, with no new lesions (Figure 1E). The patient has remained with good functional status and no upper GI symptoms, including dysphagia and odynophagia.

Discussion: Prior studies have demonstrated value of LNC in treating esophageal lesions from Barrett’s esophagus and squamous dysplasia to esophageal adenocarcinoma and squamous cell carcinoma. Treatment options for PMME invading the mediastinum are limited, with unknown efficacy of systemic chemotherapy. This case, the first to utilize LNC to treat PMME, suggests this approach is a safe, tolerable and effective management option. 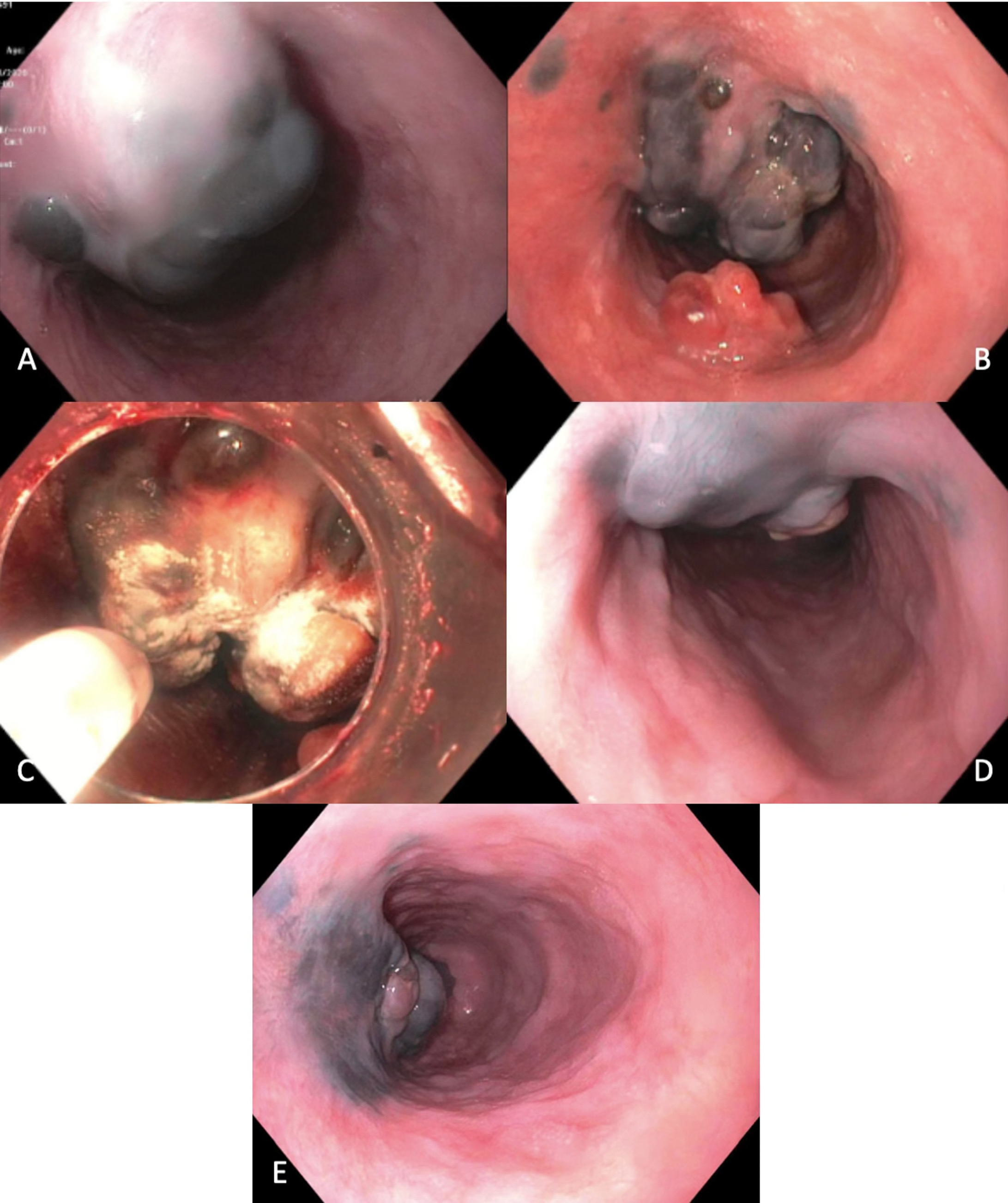