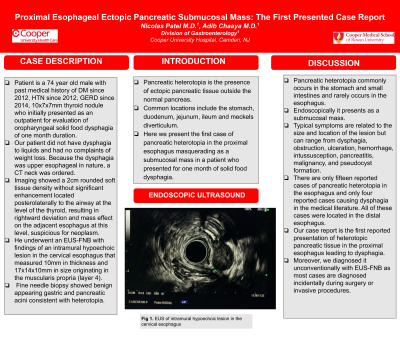 Introduction: Pancreatic heterotopia is the presence of ectopic pancreatic tissue outside the normal pancreas. Common locations include the stomach, duodenum, jejunum, ileum and meckels diverticulum. Here we present the first case of pancreatic heterotopia in the proximal esophagus masquerading as a submucosal mass in a patient who presented for one month of solid food dysphagia.

Case Description/Methods: Patient is a 74 year old male with past medical history of DM since 2012, HTN since 2012, GERD since 2014, 10x7x7mm thyroid nodule who initially presented as an outpatient for evaluation of oropharyngeal solid food dysphagia of one month duration. Our patient did not have dysphagia to liquids and had no complaints of weight loss. Because the dysphagia was upper esophageal in nature, a CT neck was ordered. Imaging showed a 2cm rounded soft tissue density without significant enhancement located posterolaterally to the airway at the level of the thyroid, resulting in rightward deviation and mass effect on the adjacent esophagus at this level, suspicious for neoplasm. He underwent an EUS-FNB with findings of an intramural hypoechoic lesion in the cervical esophagus that measured 10mm in thickness and 17x14x10mm in size originating in the muscularis propria (layer 4). Fine needle biopsy showed benign appearing gastric and pancreatic acini consistent with heterotopia.

Discussion: Pancreatic heterotopia commonly occurs in the stomach and small intestines and rarely occurs in the esophagus. Endoscopically it presents as a submucosal mass. Typical symptoms are related to the size and location of the lesion but can range from dysphagia, obstruction, ulceration, hemorrhage, intussusception, pancreatitis, malignancy, and pseudocyst formation. There are only fifteen reported cases of pancreatic heterotopia in the esophagus and only four reported cases causing dysphagia in the medical literature. All of these cases were located in the distal esophagus. Our case report is the first reported presentation of heterotopic pancreatic tissue in the proximal esophagus leading to dysphagia. Moreover, we diagnosed it unconventionally with EUS-FNB as most cases are diagnosed incidentally during surgery or invasive procedures. 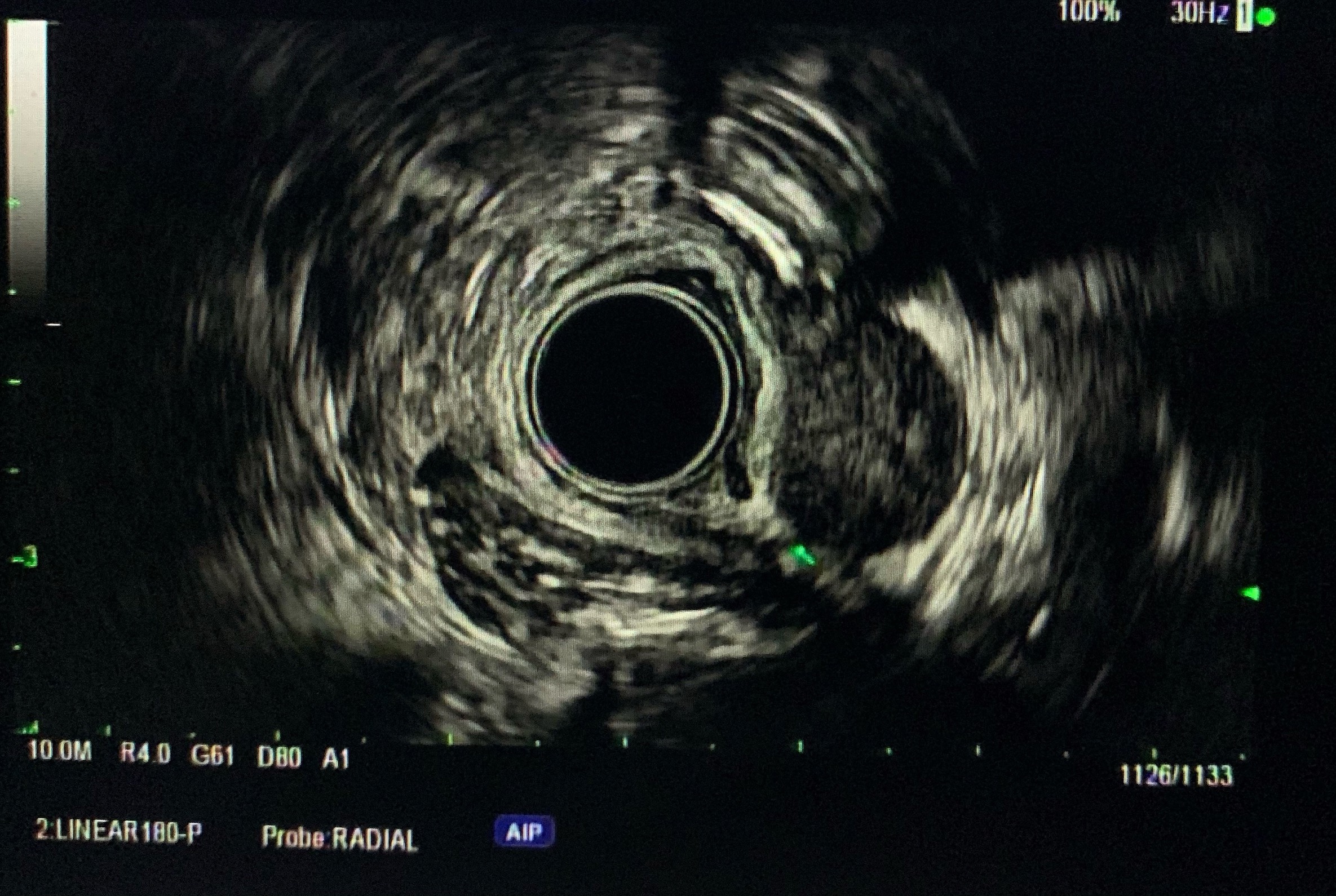 Figure: EUS of intramural hypoechoic lesion in the cervical esophagus