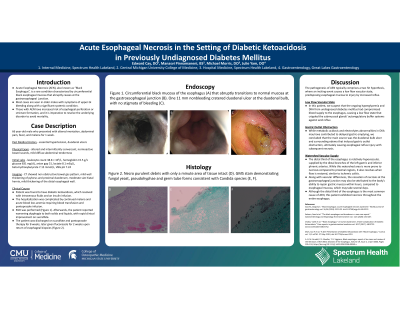 Introduction: Acute Esophageal Necrosis (AEN), also known as “Black Esophagus”, is a rare condition characterized by circumferential black esophageal mucosa that abruptly ceases at the gastroesophageal junction. Most cases are seen in older males with symptoms of upper GI bleeding along with a significant systemic condition. Those with AEN have increased risk of esophageal perforation or stricture formation, and it is imperative to resolve the underlying disorder to avoid mortality.

Case Description/Methods: We present a 66 year-old male who presented with altered mentation, abdominal pain, fever, and melena for 1 week. He was found to have diabetic ketoacidosis, which resolved with intravenous fluids and an insulin infusion.

The hospital course was complicated by melena and anemia requiring blood transfusion and pantoprazole infusion. EGD showed circumferential black mucosa throughout the entire esophagus, edema in the gastric antrum, and a nonbleeding cratered ulcer at the duodenal bulb.

Afterwards, the patient reported worsening dysphagia to both solids and liquids, with rapid clinical improvement on sucralfate. The patient was discharged on PPI therapy for 8 weeks, later given fluconazole for 2 weeks after histology demonstrated Candida in addition necro-purulent debris.

Discussion: The pathogenesis of AEN typically comprises a two hit hypothesis, where an inciting event causes a low flow vascular state, predisposing esophageal mucosa to injury by increased reflux. In this patient, we suspect that the ongoing hyperglycemia and DKA from undiagnosed diabetes mellitus had compromised blood supply to the esophagus. While metabolic acidosis and electrolytes abnormalities in DKA may have contributed to delayed gastric emptying, we concluded that the main source was the duodenal bulb ulcer and surrounding edema that induced gastric outlet obstruction, ultimately causing esophageal reflux injury with subsequent necrosis. Although the distal third of the esophagus is the most common cause of AEN due to its relatively low vascular supply, similar to watershed areas found in ischemic colitis, this patient exhibited necrosis throughout the entire esophagus. In conclusion, it is imperative to consider AEN as a possible diagnosis in the setting of GI bleed coupled with a significant systemic condition that causes a hypovascular state.

Figure: Figure 1. Endoscopy showing circumferential black mucosa of the esophagus (A) that abruptly transitions to normal mucosa at the gastroesophageal junction (B).