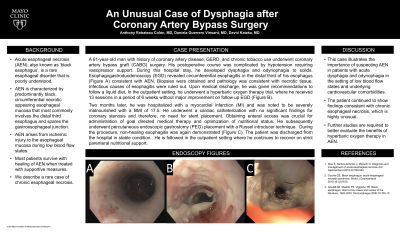 Case Description/Methods: A 61-year-old man with history of coronary artery disease, GERD, and chronic tobacco use underwent coronary artery bypass graft (CABG) surgery. His postoperative course was complicated by hypotension requiring vasopressor support. During this hospital stay, he developed dysphagia and odynophagia to solids. Esophagogastroduodenoscopy (EGD) revealed circumferential esophagitis in the distal third of his esophagus (Figure A) consistent with AEN. Biopsies were obtained and pathology was consistent with necrotic tissue. Infectious causes of esophagitis were ruled out. Upon medical discharge, he was given recommendations to follow a liquid diet. In the outpatient setting, he underwent a hyperbaric oxygen therapy trial, where he received 13 sessions in a period of 6 weeks without major improvement on follow up EGD (Figure B).

Two months later, he was hospitalized with a myocardial infarction (MI) and was noted to be severely malnourished with a BMI of 17.5. He underwent a cardiac catheterization with no significant findings for coronary stenosis and therefore, no need for stent placement. Obtaining enteral access was crucial for administration of goal directed medical therapy and optimization of nutritional status. He subsequently underwent percutaneous endoscopic gastrostomy (PEG) placement with a Russel introducer technique. During the procedure, non-healing esophagitis was again demonstrated (Figure C). The patient was discharged from the hospital in stable condition. He is followed in the outpatient setting where he continues to recover on strict parenteral nutritional support.

Discussion: This case illustrates the importance of suspecting AEN in patients developing acute dysphagia and odynophagia in the setting of low blood flow states. Our patient’s medical comorbidities, placed him at elevated risk for developing AEN during his post-operative stay. Interestingly, the patient continued to show findings of AEN 2 months after the initial insult, which is unusual for AEN, since it tends to improve over time. A trial of hyperbaric oxygen was offered with the hope to promote mucosal healing. However, this case shows that hyperbaric oxygen therapy may not be of benefit for patients with AEN. Further studies are required to better evaluate the benefits of this type of therapy in AEN.