P2530 - Simultaneous Diagnosis of Colon and Esophageal Cancer in a Lung Cancer Survivor: A Rare Case 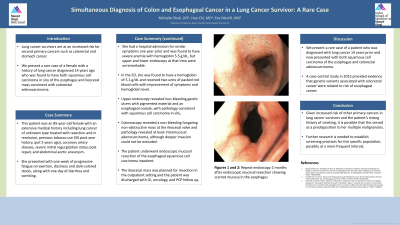 Introduction: Lung cancer survivors are at an increased risk for second primary cancers such as colorectal and stomach cancer. We present a rare case of a female with a history of lung cancer diagnosed 14 years ago who was found to have both squamous cell carcinoma in situ of the esophagus and ileocecal mass consistent with colorectal adenocarcinoma.

Case Description/Methods: An 85-year-old female with an extensive medical history including lung cancer of unknown type treated with resection and in remission, previous tobacco use (50 pack year history, quit 5 years ago), coronary artery disease, severe mitral regurgitation status post repair, and abdominal aortic aneurysm presented with one week of progressive fatigue on exertion, dizziness and dark-colored stools, along with one day of diarrhea and vomiting. She had a hospital admission for similar symptoms one year prior and was found to have severe anemia with hemoglobin 5.5 g/dL, but upper and lower endoscopy at that time were unremarkable. In the ED, she was found to have a hemoglobin of 5.1 g/dL and received two units of packed red blood cells with improvement of symptoms and hemoglobin level. Upper endoscopy revealed non-bleeding gastric ulcers with pigmented material and an esophageal nodule, with pathology consistent with squamous cell carcinoma in situ. Colonoscopy revealed a non-bleeding fungating non-obstructive mass at the ileocecal valve and pathology revealed at least intramucosal adenocarcinoma, although deeper invasion could not be excluded. The patient underwent endoscopic mucosal resection of the esophageal squamous cell carcinoma inpatient. The ileocecal mass was planned for resection in the outpatient setting and the patient was discharged with GI, oncology, and PCP follow up.

Discussion: We present a rare case of a patient who was diagnosed with lung cancer 14 years prior and now presented with both squamous cell carcinoma of the esophagus and colorectal adenocarcinoma. A case-control study in 2015 provided evidence that genetic variants associated with colorectal cancer were related to risk of esophageal cancer. Given increased risk of other primary cancers in lung cancer survivors and the patient’s strong history of smoking, it is possible that this served as a predisposition to her multiple malignancies. Further research is needed to establish screening practices for this specific population, possibly at a more frequent interval.