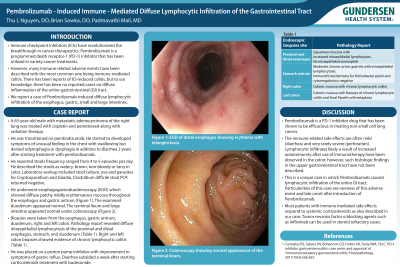 Introduction: Immune checkpoint inhibitors (ICIs) have revolutionized the breakthrough in cancer therapeutics. Pembrolizumab is a programmed death receptor-1 inhibitor that has been utilized in variety cancer treatments. However, many immune-related adverse events have been described with the most common one being immune-mediated colitis. There has been reports of ICI-induced colitis, but to our knowledge, there has been no reported cases on diffuse inflammation of the entire GI tract. We report a case of Pembrolizumab-induced diffuse lymphocytic infiltration of the esophagus, gastric, small and large intestines.

Case Description/Methods: A 65-year-old male with metastatic adenocarcinoma of the right lung was treated with cisplatin and pemetrexed along with radiation therapy. He was transitioned on pembrolizumab. He started to developed symptoms of unusual feeling in the chest with swallowing and diarrhea 2 years after starting pembrolizumab. He described 4 to 5 episodes of watery, brown stools per day. Infectious work up returned negative. He underwent esophagogastroduodenoscopy which showed diffuse patchy mildly erythematous mucosa throughout the esophagus and gastric antrum. Biopsies were taken from the esophagus, gastric antrum, duodenum, right and left colon. Pathology report revealed diffuse intraepithelial lymphocytosis of the proximal and distal esophagus, stomach, and duodenum (Table 1). Right and left colon biopsies showed evidence of chronic lymphocytic colitis (Table 1). He was placed on a proton pump inhibitor with improvement in symptoms. Diarrhea subsided a week after starting corticosteroids treatment with budesonide.

Discussion: Pembrolizumab is a programmed cell death 1 inhibitor drug that has been shown to be efficacious in treating non-small cell lung cancer. The immune-related side effects are often mild (diarrhea) and rarely severe (perforation). Lymphocytic infiltrates likely due to increased autoimmunity after use of immunotherapy have been observed in the colon; however, such histologic findings in the upper gastrointestinal tract have not been described. This is a unique case in which Pembrolizumab caused lymphocytic infiltration of the entire GI tract. Particularities of this case are rareness of this adverse event and late onset after introduction of Pembrolizumab. Most patients with immune mediated side effects respond to systemic corticosteroids as also described in our case. Tumor necrosis factor α blocking agents such as infliximab can be used in steroid refractory cases. 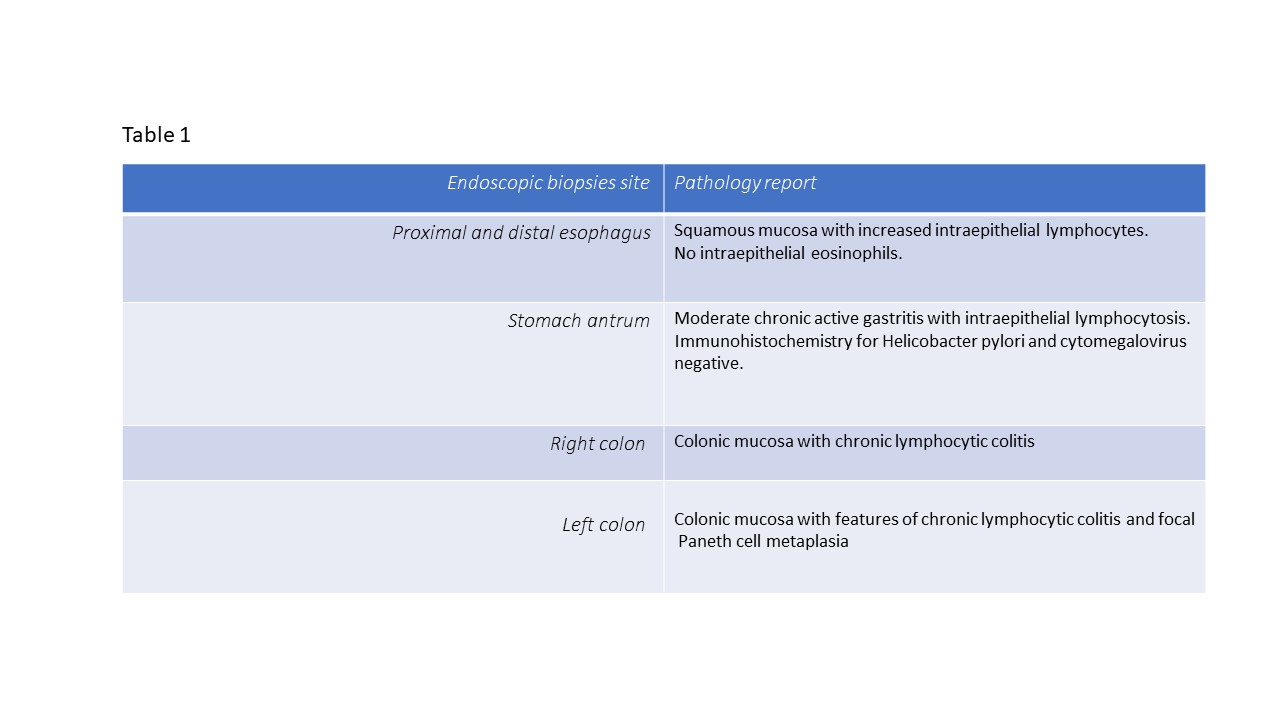