P2539 - An Unexpected Cause of Gastrointestinal Bleeding: A Birthday Surprise 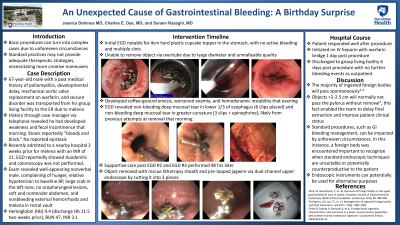 Introduction: Infrequently, basic procedures can turn into complex cases due to unforeseen circumstances. It is important for providers to recognize when standard techniques may be inadequate and more creative techniques should be implemented.

Case Description/Methods: A 67-year-old male with a past medical history of poliomyelitis, developmental delay, mechanical aortic valve replacement on warfarin, and seizure disorder was transported from his group living facility to the emergency room due to melena. The patient was nonverbal at baseline, so his history was obtained via telephone from his case manager who reported he had developed weakness and fecal incontinence the morning prior to his admission. Stools were reportedly “bloody and black” in color. There was no reported epistaxis. He had been admitted to a nearby hospital two weeks prior for melena with an INR of 21. EGD reportedly showed duodenitis and colonoscopy was not performed. His discharge Hb was 11.5 g/dL.

On examination, the patient was resting in the hospital bed comfortably, indicating that he was hungry. Vital signs were notable for relative hypotension compared to his baseline pressure. There was a large scab in his left nare, no oropharyngeal lesions, and his abdomen was soft and nontender to palpation. Rectal exam revealed nonbleeding external hemorrhoids and melena in the rectal vault. Hemoglobin was 9.4 g/dL, BUN 47, and INR 3.1. EGD was notable for a 4cm hard plastic “cupcake topper” in the stomach, no active bleeding, and multiple clots. Attempts to remove the object were unsuccessful due to its large diameter and unmalleable quality which prevented removal via the esophagus or overtube. The foreign body was successfully removed a few days later via fragmentation with a biliary lithotripsy device.

Discussion: This case highlights how standard procedures such as GI bleed management can be impacted by unforeseen circumstances, the importance of recognizing when standard endoscopic techniques may not be feasible, and how endoscopic instruments can be utilized for alternative purposes. Although the patient was able to somehow swallow the foreign body, the object was unable to be safely removed en bloc without causing significant esophageal tearing. Because the object’s diameter was >2.5cm, there was low likelihood it would pass into the duodenum, allowing time to plan the optimal extraction technique. 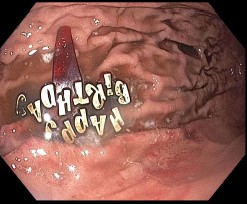