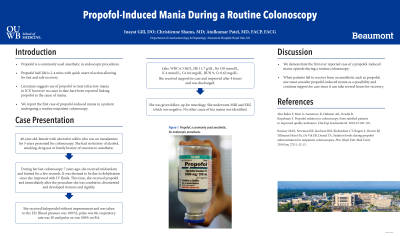 Introduction: Propofol is an anesthetic commonly used in outpatient endoscopic procedures. The quick onset of action and a half-life of 2-4 minutes allows for a fast and safe recovery. Literature suggests use of propofol to treat refractory mania in the intensive care units however no cases to date have been reported linking propofol as the cause of the mania. We report the first case of propofol-induced mania in a patient undergoing a routine outpatient colonoscopy.

Case Description/Methods: A 40-year-old-female with a past medical history of ulcerative colitis who was only taking mesalamine 3.6 g daily for 5 years presented for a colonoscopy. She had no history of alcohol, smoking, drug use or family history of any reaction to an anesthetic. 7 years prior she had received midazolam as sedation for a colonoscopy and fainted for a few seconds immediately after the procedure. It was deemed secondary to dehydration since her blood pressure dropped to 90/60 and she improved with intravenous fluids. She had not followed up since then. This time, she received propofol for the colonoscopy and immediately after the procedure became combative and disoriented. She developed tremors and rigidity. She was given haloperidol without improvement and taken to the emergency department. Vital signs showed blood pressure of 109/52 mmHg, pulse of 86 beats/min, respiratory rate of 20 breaths/min and pulse oximetry of 100% on room air. Labs demonstrated a white blood cell count of 6.3 bil/L (normal: 33-10.7 bil/L), hemoglobin of 11.7 g/dL (normal: 12.1-15 g/dL), sodium of 138 mmol/L (normal: 135-145 mmol/L), potassium of 4 mmol/L (normal: 3.5-5.2 mmol/L), calcium of 8.6 mg/dL (normal: 8.4-10.4 mg/dL), blood urea nitrogen of 9 (normal: 8-22 mg/dL) and creatinine of 0.62 mg/dL (normal: 0.6-1.4 mg/dL). She improved with supportive care after 4 hours and was discharged with follow-up given for neurology. She underwent magnetic resonance imaging and electroencephalogram shortly after the incident which was unremarkable. No other cause of her mania was identified.

Discussion: This case demonstrates the first ever reported case of a propofol-induced manic episode during a routine colonoscopy. Literature discusses the use of propofol to treat mania but not as the cause of it. When patients fail to recover from an anesthetic such as propofol post-operatively, one must consider propofol-induced mania as a possibility and continue supportive care since it can take several hours for recovery.