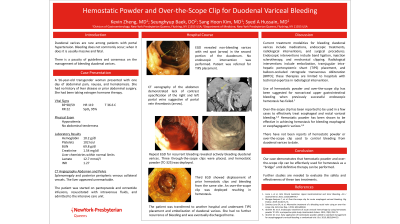 Introduction: Duodenal varices are rare and have an estimated prevalence of 0.4% in patients with portal hypertension who undergo upper endoscopy. Bleeding from duodenal varices does not commonly occur; when it does it is usually massive and fatal. There is a paucity of guidelines and consensus on the management of bleeding duodenal varices. We report the alternative use of hemostatic powder and over-the-scope clip (OTSC) to achieve hemostasis in a case of duodenal variceal hemorrhage due to prehepatic portal hypertension caused by portal vein thrombosis.

Case Description/Methods: A 56-year-old transgender woman with no prior history of liver disease presented with acute hematemesis. She had been taking estrogen hormone therapy. Her INR and liver chemistries on admission were within normal limits. Esophagogastroduodenoscopy (EGD) revealed no active bleeding, but varices with a red spot in the second portion of the duodenum. No endoscopic intervention was performed. CT venography demonstrated portal vein thrombosis and prominent abdominal venous collateral vessels. The patient was referred to interventional radiology for placement of a transjugular intrahepatic portosystemic shunt (TIPS).

The next day she had recurrent hematemesis and melena. Repeat EGD revealed bleeding duodenal varices. Three through-the-scope clips were placed, and hemostatic powder (TC-325) was used to achieve hemostasis. Several days later, the patient had another episode of bleeding, and EGD revealed displacement of prior hemostatic clips and bleeding from the same site in the duodenum. An OTSC (Padlock) was deployed, achieving complete hemostasis. The patient underwent successful TIPS placement, had no further recurrence of bleeding, and was eventually discharged home.

Discussion: Current treatment modalities for bleeding duodenal varices include medications, endoscopic band ligation, injection sclerotherapy, TIPS, balloon-occluded retrograde transvenous obliteration (BRTO), and surgery. There have not been reports of hemostatic powder or OTSC used to control bleeding from duodenal varices to date. Our case demonstrates that hemostatic powder and OTSC can be effectively used to achieve hemostasis as a “bridge” until definitive therapy can be performed. Further studies are needed to evaluate the safety and effectiveness of these two treatments. 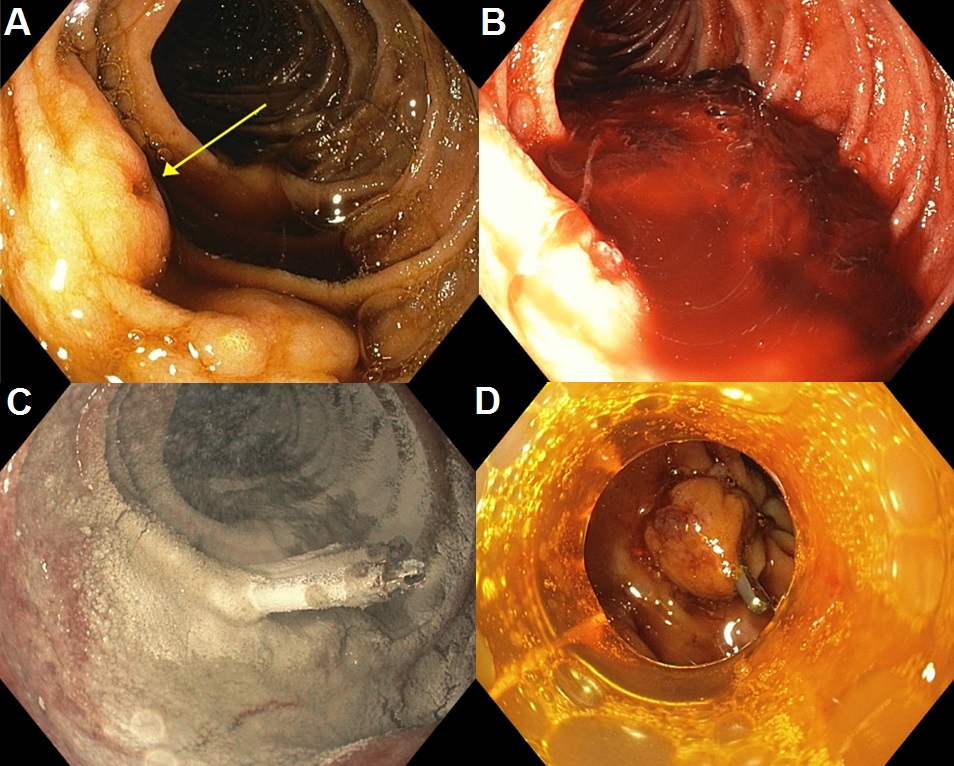