P2590 - Anaplastic Large Cell Lymphoma of the Small Intestine: An Unusual Cause of Upper GI Bleeding 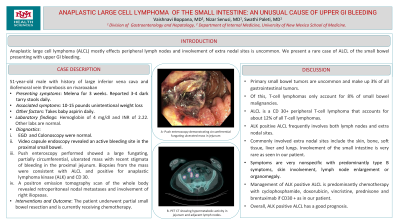 Case Description/Methods: A 51 year old male with history of large inferior vena cava and iliofemoral vein thrombosis on rivaroxaban presented to the emergency department with melena for 3 weeks. He reported 3-4 dark, tarry stools daily with an associated 10-15 lbs weight loss. Physical examination was unremarkable and labs revealed a hemoglobin of 4 mg/dl and INR of 2.22. The remainder of the labs were normal. He was transfused 4 units of packed red blood cells with improvement of hemoglobin to 7.4 mg/dl. An upper endoscopy and colonoscopy were performed which were normal. Additional workup with a video capsule endoscopy revealed an active bleeding site in the proximal small bowel. A push enteroscopy was then performed which showed a large fungating, partially circumferential, ulcerated mass with recent stigmata of bleeding in the proximal jejunum. Biopsies from the mass were consistent with ALCL and positive for anaplastic lymphoma kinase (ALK) and CD 30. A positron emission tomography scan of the whole body revealed retroperitoneal nodal metastases and involvement of right iliopsoas. The patient underwent partial small bowel resection and is currently receiving chemotherapy.

Discussion: Primary small bowel tumors are uncommon and make up 3% of all gastrointestinal tumors. Of this, T-cell lymphomas only account for 8% of small bowel malignancies. ALCL is a CD 30+ peripheral T-cell lymphoma that accounts for about 12% of all T-cell lymphomas. ALK positive ALCL frequently involves both lymph nodes and extranodal sites. The most commonly involved extranodal sites include the skin, bone, soft tissue, liver and lungs. Involvement of the small intestine is very rare as seen in our patient. Management of ALK positive ALCL is predominantly chemotherapy with cyclophosphamide, doxorubicin, vincristine, prednisone and brentuximab if CD30 + as in our patient. Overall, ALK positive ALCL has a good prognosis.