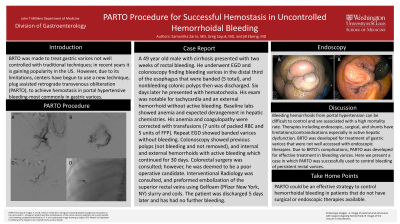 Introduction: Balloon-occluded retrograde transvenous obliteration (BRTO) was made to treat gastric varices not well controlled with traditional techniques; in recent years it is gaining popularity in the US (1). However, due to its limitations, centers have begun to use a new technique, plug assisted retrograde transvenous obliteration (PARTO), to achieve hemostasis in portal hypertensive bleeding-most commonly in gastric varices. We describe a case of successful PARTO hemostasis in uncontrolled hemorrhoidal bleeding.

Case Description/Methods: A 49-year-old male with cirrhosis presented with two weeks of rectal bleeding. He underwent EGD and colonoscopy finding bleeding varices in the distal third of the esophagus that were banded (5 total), and nonbleeding colonic polyps then was discharged. Six days later he presented with hematochezia. His exam was notable for tachycardia and an external hemorrhoid without active bleeding. Baseline labs showed anemia and expected derangement in hepatic chemistries. His anemia and coagulopathy were corrected with transfusions (7 units of packed RBC and 5 units of FFP). Repeat EGD showed banded varices without bleeding. Colonoscopy showed previous polyps (not bleeding and not removed), and internal and external hemorrhoids with active bleeding which continued for 30 days. Colorectal surgery was consulted; however, he was deemed to be a poor operative candidate. Interventional Radiology was consulted, and preformed embolization of the superior rectal veins using Gelfoam (Pfizer New York ,NY) slurry and coils. The patient was discharged 5 days later and has had no further bleeding.

Discussion: Bleeding hemorrhoids from portal hypertension can be difficult to control and are associated with a high mortality rate. Therapies including endoscopic, surgical, and shunts can be effective, but have limitations and contraindications especially in active hepatic dysfunction. BRTO was developed in Japan for treatment of gastric varices that were not well accessed with endoscopic therapies. However, BRTO is associated with a devastating complications and limitations. PARTO is a new and effective treatment in bleeding varices. It has been reported most commonly in the treatment of gastric varices. Here we present a case in which PARTO was successfully used to control bleeding of persistent rectal varices. 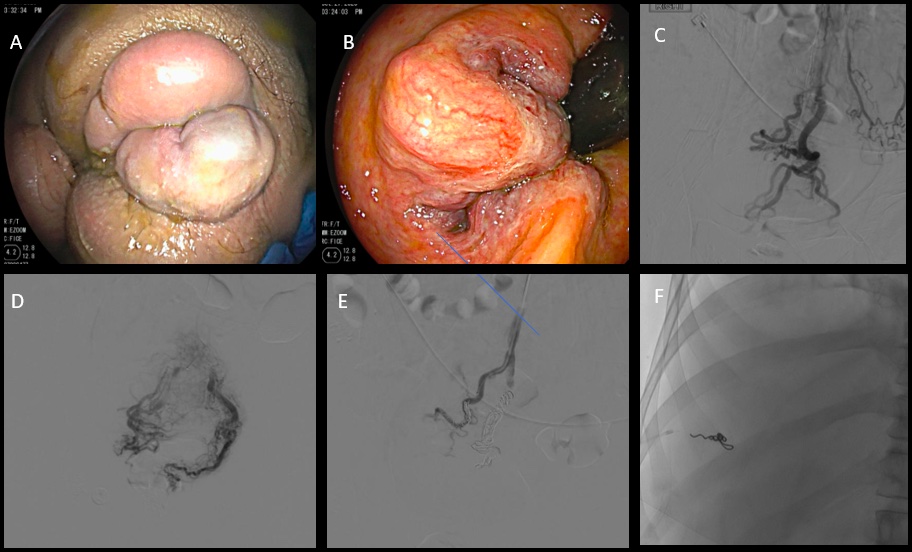