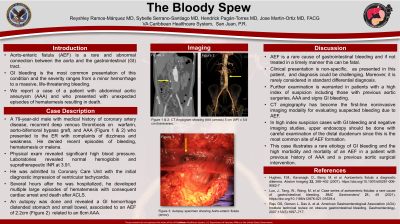 Introduction: Aortoenteric fistula (AEF) is a rare and abnormal connection between the aorta and the gastrointestinal (GI) tract. Despite multiple available diagnostic advances its diagnosis is often challenging due to non-specific presentation. However, delayed diagnosis could be fatal mostly due to abrupt massive GI bleeding. We report a case of a patient with abdominal aneurysm and aortobifemoral bypass graft who presented with dizziness and elevated blood pressure several hours before unexpected hematemesis resulting in death.

Case Description/Methods: This is the case of a 79-year-old male with medical history of coronary artery disease, recurrent deep venous thrombosis on full anticoagulation with warfarin, aortobifemoral bypass graft, and abdominal aneurysm who presented to the Emergency Department with complaints of dizziness and weakness while on vacation and the initial diagnostic impression was ventricular tachycardia. Physical exam revealed significant high blood pressure. Laboratories revealed normal hemoglobin and supratherapeutic INR at 3.91. The patient denied recent episodes of bleeding, hematemesis or melena. The patient was admitted to the hospital and after several hours, he developed multiple large episodes of hematemesis with consequent cardiac arrest. An autopsy was done and revealed an AEF associated with an 8 cm abdominal aortic aneurysm (AAA) at the level of the aorto-femoral graft with associated gastrointestinal hemorrhage distending the stomach and small bowel.

Discussion: AEF is defined as a communication between the aorta and the gastrointestinal tract and diagnosis should be considered in patients with previous aortic surgeries and GI bleeding. However, the presentation could be very challenging. Clinical presentation is non-specific as presented in this patient. Secondary AEF can vary in time to presentation from a few months to several years and even with a high index of suspicion. AEF is rarely considered in standard differential diagnosis, mostly due to its infrequency. The classic triad of bleeding, abdominal pain, and a palpable abdominal mass is not considered reliable as it occurs in only 6 to 12 percent of patients with AEF. Despite CT Scan being the most sensitive of available imaging modalities, the false-negative rate is high. This case illustrates a rare etiology of GI bleeding and the high morbidity and mortality of an AEF in a patient with previous history of AAA and a previous aortic surgical intervention.