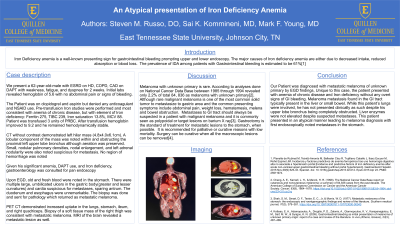 Introduction: Iron deficiency anemia is a well-known presenting sign for gastrointestinal bleeding prompting upper and lower endoscopy. We present a 62-year-old male with ESRD on HD, COPD, CAD on DAPT with weakness, fatigue, and dyspnea for two weeks.

Case Description/Methods: Labs revealed a hemoglobin of 5.6 with no abdominal pain or signs of bleeding.

The patient was on clopidogrel and aspirin, but denied anticoagulant and NSAID use. Pre-transfusion Iron studies were performed and most consistent with anemia of chronic disease, but with element of iron deficiency: ferritin 275 tibc 239 iron 33 iron saturation 13.8% mcv 88. Patient was transfused 3 u prbc with improvement (9.2) and remained hemodynamically stable.

CT without contrast demonstrated left hilar mass (4.8x4.0x6.1 cm). A lobular component of the mass was noted within and obstructing the proximal left upper lobe bronchus although aeration was preserved. Small, nodular pulmonary densities and nodal enlargement, left adrenal nodularity were also noted and suspicious for metastases. The stomach, small bowel, and colon were unremarkable. The liver demonstrated a 1.5cm hypoenhancement concerning for metastasis. No region of hemorrhage was noted.

Given his significant anemia, DAPT use, and iron deficiency, gastroenterology was consulted for panendoscopy.

Upon EGD, old and fresh blood were noted in the stomach. There were multiple large, umbilicated ulcers in the gastric body (greater and lesser curvatures) and cardia suspicious for metastases, sparing the antrum. The duodenum and esophagus were unremarkable. Pathology returned as metastatic melanoma.

PET CT demonstrated increased uptake in the lungs, stomach, ileum, and right quadriceps. Biopsy of a soft tissue mass of the right thigh was consistent with metastatic melanoma. MRI of the brain revealed a metastatic lesion as well.

Discussion: Our patient was diagnosed with metastatic melanoma of unknown primary by EGD findings. Unique to this case, the patient presented with anemia of chronic disease and iron deficiency without overt signs of GI bleeding. Melanoma metastasis found in the GI tract typically present in the liver or small bowel. While this patient’s lungs were involved, he had not presented clinically as such, despite his upper lobe bronchus being almost completely obstructed. Liver enzymes were not elevated despite suspected metastases. This patient presented in an atypical manner leading to melanoma diagnosis with first endoscopically noted metastases in his stomach.