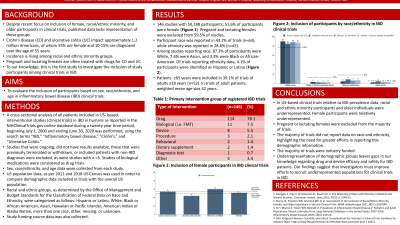 Introduction: Despite recent focus on inclusion of female, racial/ethnic minority, and older participants in clinical trials, there continues to be a lack of equitable representation of these groups in published data. Inflammatory bowel disease (IBD), once thought to be primarily a disease of non-Hispanic white patients, has seen rapid epidemiologic shifts in recent decades, with rising incidence in those from racial and ethnic minority groups and across the globe. In this study, we evaluated the inclusion of participants based on sex, race/ethnicity, and age in United States (US) based IBD clinical trials.

Methods: We performed a cross-sectional analysis of all patients included in US-based, interventional studies in IBD as reported in the National Institute of Health (NIH) ClinicalTrials.gov online database registry during a twenty-year time period from July 1, 2000 through July 1, 2020.

Results: Of the 146 included studies, 51.6% of participants were female (although they comprise approximately 55.0% of patients with IBD) (Figure 1). Gender data was available for all included studies. Pregnant and breastfeeding females were excluded from 59.5% of studies. Participant race was reported in 43.2% of trials (n=63), while ethnicity was reported in only 28.8% (n=42) of studies. Among the studies reporting race, 87.3% of participants were white, 7.6% were reported as Asian, and 3.3% were Black or African-American. Of the trials with ethnicity data, 4.1% of participants were identified as Hispanic (Figure 2). All studies reported on patient age. However, patients over 65 years were included in only 35.5% of trials of adult patients ( >=18 years) (n=52), and only 1 trial included patients >=85 years old. In trials of adult patients, the weighted mean age was 42 years.

Discussion: We identified that relative to the US IBD prevalence data, female patients were relatively underrepresented in US-based clinical trials. Members of racial and ethnic minority groups were also underrepresented, particularly Black or African-American participants and those of Hispanic ethnicity. The majority of trials did not report data on race and ethnicity, highlighting the need for greater efforts in reporting this demographic information moving forward. Older individuals were also poorly represented in the data, making it challenging to extrapolate medication and device safety and efficacy for this population. 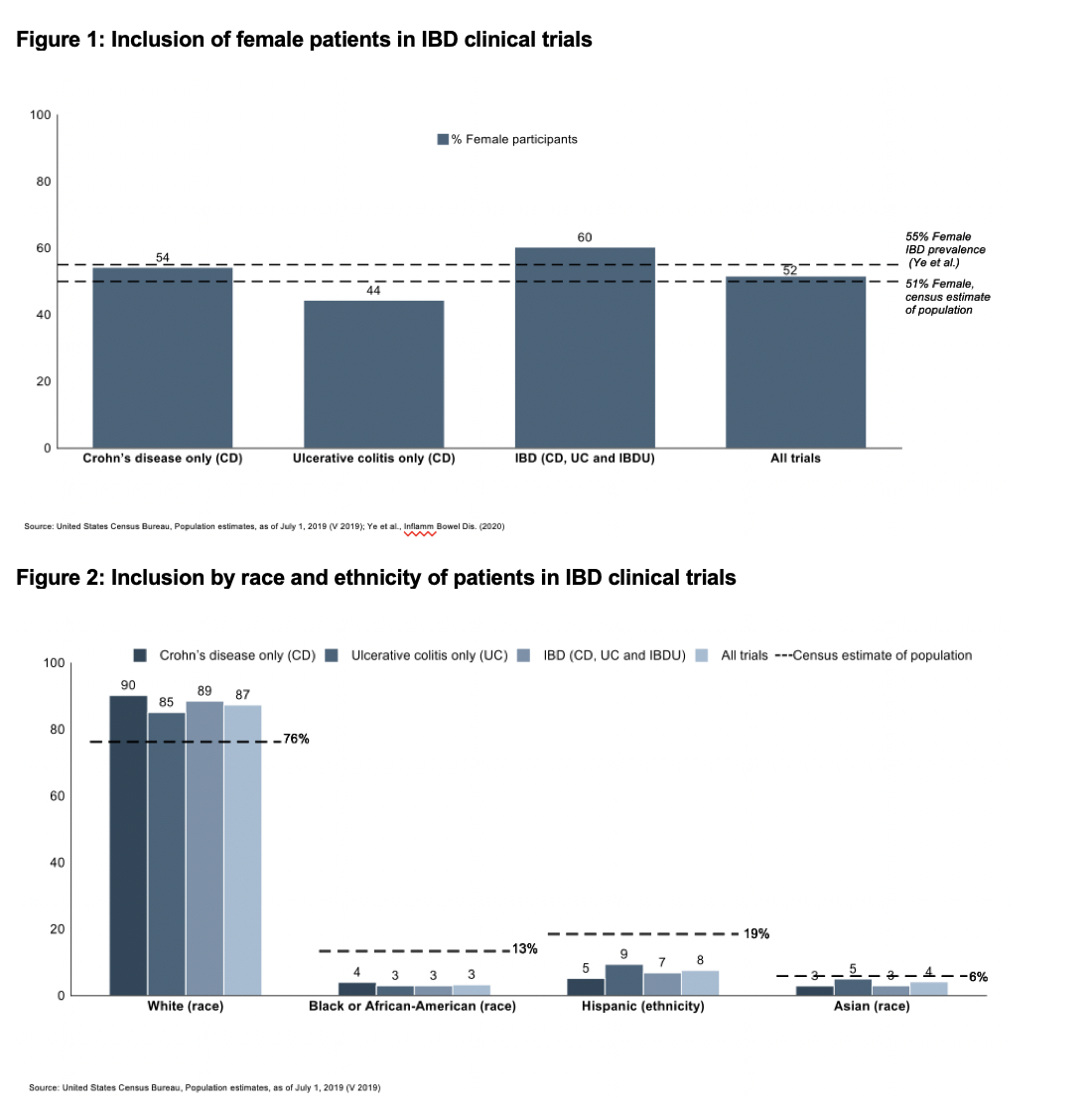