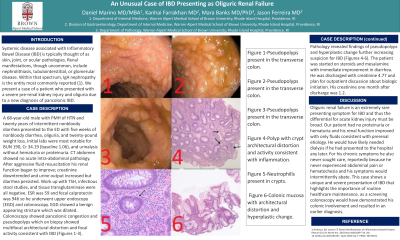 Introduction: Systemic disease associated with Inflammatory Bowel Disease (IBD) is typically thought of as skin, joint, or ocular pathologies. Renal manifestations, though uncommon, include nephrolithiasis, tubulointerstitial, or glomerular disease. Within that spectrum, IgA nephropathy is the entity most commonly reported. We present a case of a patient who presented with a severe pre-renal kidney injury and oliguria due to a new diagnosis of pancolonic IBD.

Case Description/Methods: A 68-year-old male with PMH of HTN and twenty years of intermittent nonbloody diarrhea presented to the ED with five weeks of nonbloody diarrhea, oliguria, and twenty pound weight loss. Initial labs were most notable for BUN 190, Cr 34.19 (baseline 1.06), and urinalysis without hematuria or proteinuria. CT abdomen showed no acute intra-abdominal pathology. After aggressive fluid resuscitation his renal function began to improve; creatinine downtrended and urine output increased but diarrhea persisted. Work up with TSH, infectious stool studies, and tissue transglutaminase were all negative. ESR was 59 and fecal calprotectin was 946 so he underwent upper endoscopy (EGD) and colonoscopy. EGD showed a benign appearing stricture which was dilated. Colonoscopy showed pancolonic congestion and pseudopolyps which on biopsy showed multifocal architectural distortion and focal activity consistent with IBD (Figures 1-3). Pathology revealed findings of pseudopolyps and hyperplastic change further increasing suspicion for IBD (Figures 4-6). The patient was started on steroids and mesalamine with immediate improvement in diarrhea. He was discharged with creatinine 4.77 and plan for outpatient discussion about biologic initiation. His creatinine one month after discharge was 1.2.

Discussion: Oliguric renal failure is an extremely rare presenting symptom for IBD and thus the differential for acute kidney injury must be broad. Our patient had no proteinuria or hematuria and his renal function improved with only fluids consistent with prerenal etiology. He would have likely needed dialysis if he had presented to the hospital any later. For his chronic symptoms he also never sought care, reportedly because he never experienced abdominal pain or hematochezia and his symptoms would intermittently abate. This case shows a unique and severe presentation of IBD that highlights the importance of routine healthcare maintenance, as a screening colonoscopy would have demonstrated his colonic involvement and resulted in an earlier diagnosis. 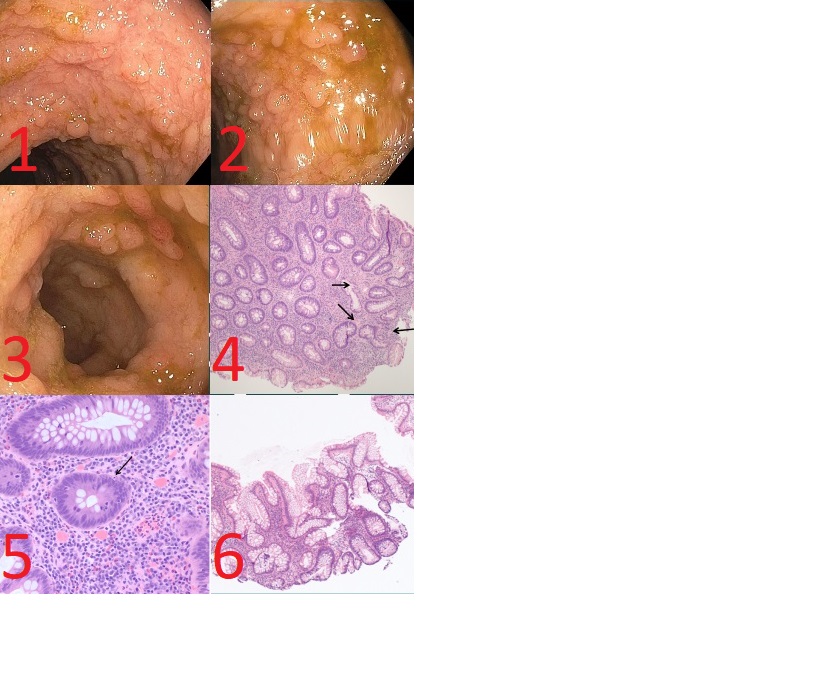