P2712 - Taking a Look From Above: Fistulizing Crohn’s Disease of the Esophagus 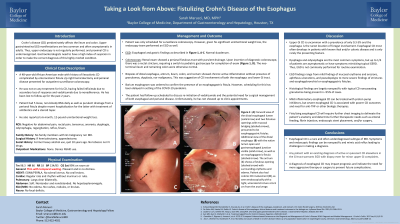 Case Description/Methods: A 48-year-old male with a 20-year history of ileocolonic CD complicated by enterocolonic fistula status-post right hemicolectomy and perianal disease presented for outpatient endoscopy. He had 5 loose non-bloody stools daily and purulent drainage from a perianal fistula for which he was recently hospitalized and required steroids and antibiotics. He appeared thin with a 6-month, 12-pound unintentional weight loss but denied abdominal pain, dysphagia, odynophagia, regurgitation, or reflux. He was not on treatment for his CD, having failed infliximab and vedolizumab in the past.

On rectal exam, there was a perianal fistulous tract with purulent drainage. Colonoscopy revealed a tight, ulcerated rectal stricture requiring a pediatric gastroscope to pass. The neo-terminal ileum and remaining colon were otherwise normal. Given his weight loss, EGD was done. In the distal esophagus, there were two diverticula with mucosal bridging, presumed to be fistulous tracts. There was also a fistulous opening in the antrum. The duodenum was normal. Biopsies of antrum, ileum, colon, and rectum showed chronic active inflammation. Barium esophagram was ordered to confirm the presence of an esophagogastric fistula. The patient had follow-up scheduled to discuss biologic and/or surgical management.

Discussion: Esophageal CD, the rarest form of foregut CD, can include mucosal erosions and thickening, aphthous ulceration, strictures, or fistulas. Dysphagia and odynophagia are the most common complaints, but over one-third of patients lack symptoms. Most esophageal CD cases are mild with nonspecific EGD findings similar to gastroesophageal reflux or medication-induced injury and are often treated simply with proton pump inhibitors after H. pylori is ruled out. However, severe upper GI findings—strictures and fistulas—are associated with poorer CD outcomes and need for anti-TNF or other biologic therapy. Though esophageal CD is generally diagnosed in patients who already have ileal and/or colonic disease on medication, worrisome upper GI symptoms or clinical change warrant an EGD as findings may impact prognosis and indicate the need for more aggressive therapy or surgery to prevent future complications. 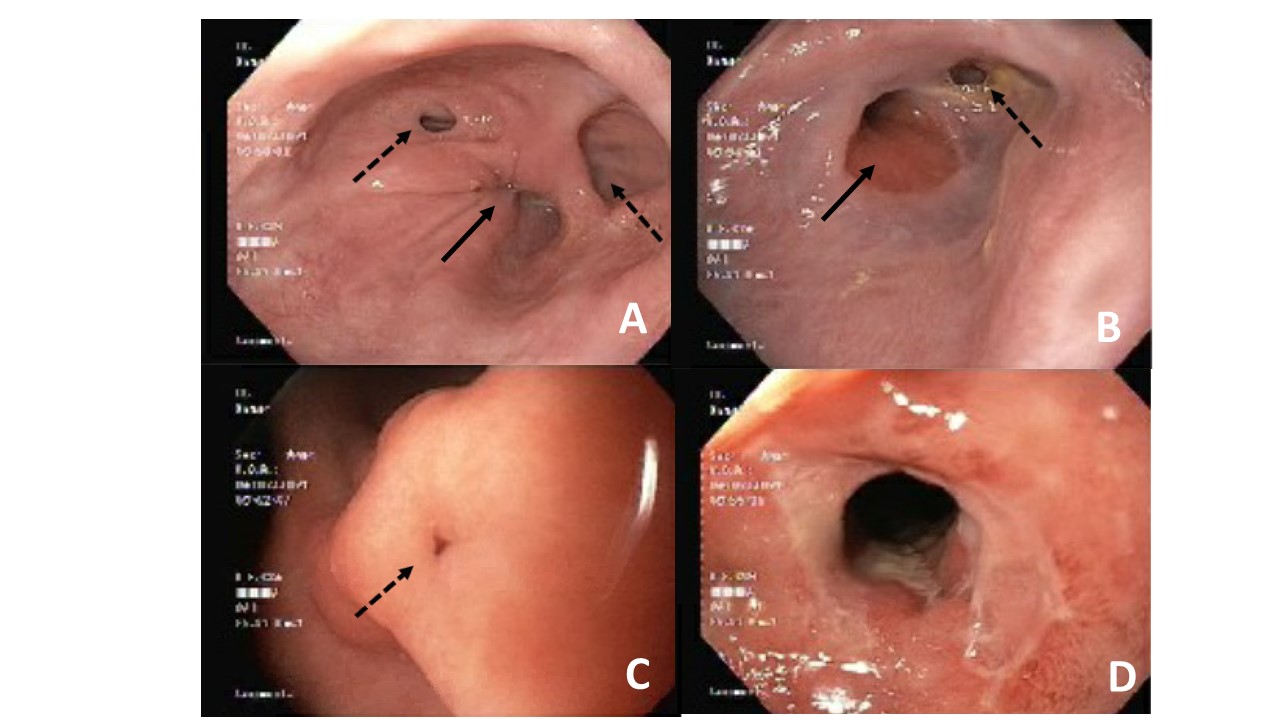