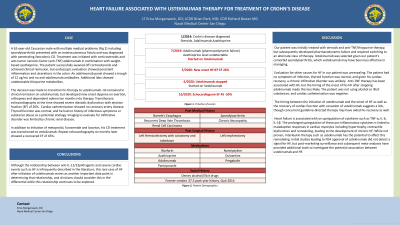 Introduction: We present a case of new onset congestive heart failure (CHF) after initiation of Ustekinumab for Crohn’s disease (CD) with subsequent recovery of cardiac function after discontinuation of therapy.

Case Description/Methods: A 62-year-old male with history of HLA-B27 associated spondyloarthritis and penetrating ileocolonic Crohn’s disease managed on Adalimumab and Azathioprine presented with intermittent abdominal pain. Colonoscopy demonstrated active disease and Adalimumab trough was 12 ug/mL without anti-drug antibodies, indicating secondary loss of response. He was transitioned to Ustekinumab monotherapy and ten-months into treatment developed new onset dyspnea, paroxysmal nocturnal dyspnea, and dependent edema consistent with new onset CHF. An echocardiogram demonstrated severe diastolic dysfunction and severe global hypokinesis with an ejection fraction (EF) of 26%. Subsequent cardiac catheterization showed no coronary artery disease, overall consistent with non-ischemic dilated cardiomyopathy (NICM). The patient had no history of infectious symptoms or alcohol/substance abuse as a potential etiology and thyroid function was normal. Imaging to evaluate for infiltrative disorder was limited by chronic renal disease. He was then transitioned to Vedolizumab and repeat echocardiogram four-months later showed a recovered left ventricular EF of 45%.

Discussion: Ustekinumab is a monoclonal antibody to the p40 subunit of IL-12/23 FDA approved for the treatment of both Ulcerative Colitis and Crohn’s disease. While the studies that led to FDA approval did not detect a signal for CHF, post marketing surveillance has detected rare cases of CHF after initiation of Ustekinumab, though these have been thought to be unrelated to this medication. We present a case of CHF after starting Ustekinumab. While an exhaustive evaluation for infectious causes did not occur, the patient had no symptoms of an infection. Given his cardiac recovery, a chronic infiltrative disorder is also less likely. The timing of the onset of his CHF after stopping Adalimumab also makes this a less likely cause. Overall, the time course of our patient’s presentation and cardiac improvement with discontinuation of therapy supports a possible relationship between Ustekinumab and heart failure, and clinicians should consider this in the differential while this association continues to be explored. 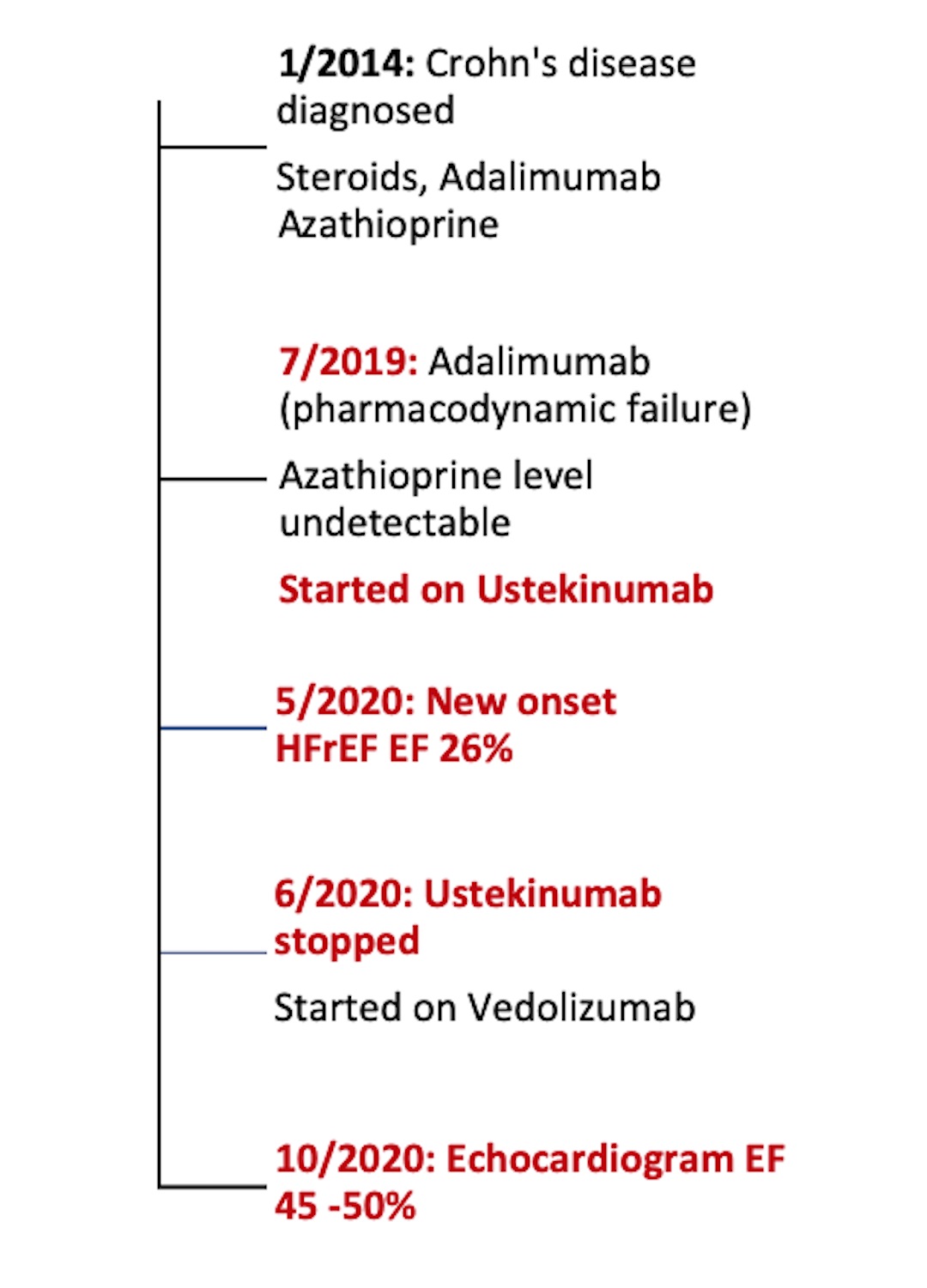 Figure: Timeline of events from diagnosis of Crohn's Disease to development of HFrEF
Table: Patient Demographics