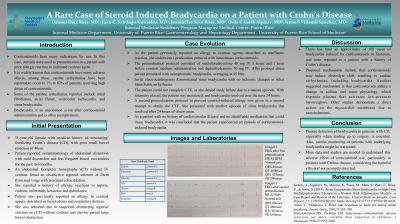 Case Description/Methods: 31-year-old female with medical history of structuring/fistulizing crohns disease (CD), with prior resection of 18 inches of the small bowel, admitted due to suspected obstructing sigmoid stricture on ct without contrast in an outpatient setting. As high suspicion of large bowel obstruction, ct enterography (CTE) was ordered. As the patient previously reported an allergy to contrast agents, described as facial edema and respiratory distress, she underwent a predication protocol with intravenous corticosteroids. The protocol consisted of methylprednisolone 40 mg IV 5 hours and 1 hour before contrast medium administration and diphenhydramine 50 mg IV. After protocol doses patient presented with asymptomatic bradycardia, averaging at 45 btm. Serial electrocardiograms demonstrated sinus bradycardia with no ischemic changes or other identifiable arrhythmias. The patient could not complete CTE, as she denied study before commencing due to a nausea episode. With telemetry placed, the patient was monitored, and bradycardia resolved over 24 hours. A second premedication protocol to prevent contrast-induced allergy was given in a second attempt to obtain the CTE. She presented with another episode of sinus bradycardia that resolved after 24 hours of observation. As a patient with no history of cardiovascular disease and no identifiable medication that could cause bradycardia, it was concluded that the patient experienced an episode of corticosteroid-induced bradycardia

Discussion: An exact etiology of corticosteroid-induced bradycardia has not been found, but there are proposed mechanisms. There have been 105 cases of bradycardia induced by corticosteroids in literature, and none reported in a patient with a history of CD. Therefore, this association may be underdiagnosed. Prompt detection of bradycardia in patients with CD, especially when leading up to surgery, is essential. More data and studies are needed to understand this adverse effect of corticosteroid use, particularly in patients with CD, considering the harmful development if not detected.