P2771 - Tubular Adenoma at the Hepatico-Jejunal Anastomosis – It Can Happen! 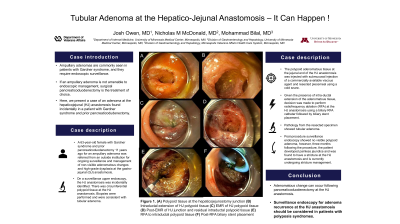 Introduction: Ampullary adenomas are commonly seen in patients with Gardner syndrome and if an ampullary adenoma is not amenable to endoscopic management, surgical pancreaticoduodenectomy is the treatment of choice. Patients with Gardner syndrome require surveillance gastrointestinal (GI) endoscopy, however, there are no guidelines regarding surveillance of the hepatico-jejunal (HJ) anastomosis following surgery. Here, we present a case of an adenoma at the HJ anastomosis in a patient with Gardner syndrome and prior pancreaticodudenectomy which was incidentally found on upper endoscopy.

Case Description/Methods: A 63-year-old female with Gardner syndrome and prior pancreaticoduodenectomy 11 years ago for an ampullary adenoma was referred from an outside institution for ongoing surveillance and management of non-visible adenomatous changes and high-grade dysplasia at the gastro-jejunal (GJ) anastomosis. On a surveillance upper endoscopy, the HJ anastomosis was incidentally identified. There was circumferential polypoid tissue at the HJ anastomosis. Biopsies were performed and were consistent with tubular adenoma. On repeat upper endoscopy, the HJ anastomosis was carefully examined and there appeared to be extension of adenomatous tissue into the intra-hepatic ducts. The polypoid adenomatous tissue at the HJ anastomosis was injected with submucosal injection of a commercially available viscous agent and resected piecemeal using a cold snare. Given the presence of intra-ductal extension of the adenomatous tissue, decision was made to perform radiofrequency ablation (RFA) at the HJ anastomosis using a biliary RFA catheter. A biliary stent was placed at the end of the procedure. Pathology from the resected specimen showed tubular adenoma. The patient had pain post procedure warranting hospital admission but was discharged and did well afterwards. Surveillance endoscopy four weeks following procedure did not show any visible polypoid adenoma present, however, three months following the procedure, the patient developed painless jaundice and was found to have a stricture at the HJ anastomosis and is currently undergoing stricture management. 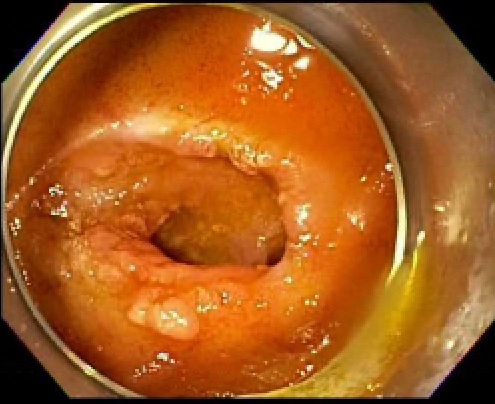 Figure: Figure 1) Endoscopic view of the HJ anastomosis, with polypoid tissue which later showed tubular adenoma on histology after resection.