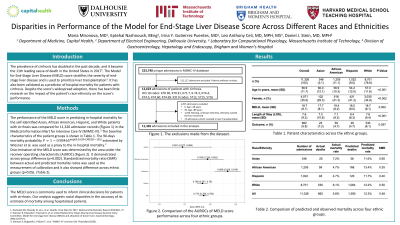 Introduction: The prevalence of cirrhosis has doubled in the past decade, and it became the 11th leading cause of death in the United States in 2017. The Model for End-Stage Liver Disease (MELD) score stratifies the severity of end-stage liver disease and is used to prioritize liver transplantation. It has also been validated as a predictor of in-hospital mortality for patients with cirrhosis. Despite the score’s widespread adoption, there has been little research on the impact of the patient’s race-ethnicity on the score’s performance.

Methods: The performance of the MELD score in predicting in-hospital mortality for the Asian, African American, Hispanic, and White patient groups was compared for 11,326 admission records in the Medical Information Mart for Intensive Care IV database for patients with cirrhosis. The binned 90-days mortality rates proposed by Wiesner et al. [1] were used to determine the comparative MELD scores. Discrimination and calibration were determined for the score in all four groups. Discrimination of the MELD score was determined by the area under the receiver operating characteristic (AUROC) curve, and calibration was evaluated using a standardized mortality ratio (SMR) between actual and predicted mortality ratios in each predicted mortality category.

Discussion: The MELD score is commonly used to inform clinical decisions for patients with cirrhosis. Our analysis suggests racial disparities in the accuracy of its estimate of mortality among hospitalized patients. Further work is needed to identify the etiology of these disparities and ensure consistent performance of the score across all races and ethnicities.