P2820 - Secondary and Tertiary Prophylaxis of Esophageal Variceal Bleeding: Can We Be Doing Better? 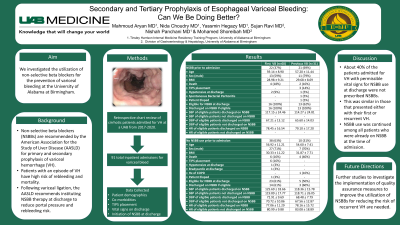 Introduction: Non-selective beta blockers (NSBBs) are recommended by the American Association for the Study of Liver Disease (AASLD) for primary and secondary prophylaxis of variceal hemorrhage (VH). Patients with an episode of VH have high risk of rebleeding and mortality. Following variceal ligation, the AASLD recommends instituting NSBB therapy at discharge to reduce portal pressure and rebleeding risk. We investigated the utilization of NSBBs for prevention of VB.

Methods: We performed a retrospective review of cirrhotic patients admitted for VH at a tertiary center from 2017-2020. Patient demographics, co-morbidities, vital signs on discharge, and cirrhosis etiology were recorded. Data on initiation of NSBBs at discharge was also obtained. Study cohorts were stratified based on use of NSBB prior to admission and history of VH. Categorical and continuous variables were presented as a frequency percentage and mean ± standard deviations respectively.

Discussion: About 40% of the patients admitted for VH with permissible vital signs for NSBB use at discharge were not prescribed NSBBs. This was similar in those that presented either with their first or recurrent VH. However, NSBB use was continued among all patients who were already on NSBB at the time of admission. Further studies to investigate the implementation of quality assurance measures to improve the utilization of NSBBs for reducing the risk of recurrent VH are needed.

Table: Baseline Variables and Vital Signs Upon Discharge of the Stratified Cohort