P2882 - Budd-Chiari Syndrome in Setting of Pregnancy and Myeloproliferative Neoplasm 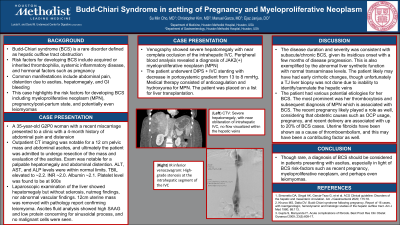 Introduction: Budd-Chiari Syndrome (BCS) is a rare disorder defined as hepatic venous outflow tract obstruction. We present a 35-year-old lady with a recent miscarriage presenting with refractory ascites. Venography was consistent with a diagnosis of BCS. Work-up for thrombocytosis revealed JAK2(+) myeloproliferative neoplasm (MPN). This case highlights the importance of considering BCS as a potential cause for ascites and exemplifies some etiologies for BCS such as MPN and pregnancy.

Case Description/Methods: A 35-year-old G2P0 lady with a recent miscarriage presented to a clinic with a 4-month history of abdominal pain and distension. Outpatient CT imaging was notable for a 12cm pelvic mass and abdominal ascites, and ultimately the patient was admitted to undergo resection of the mass and evaluation of the ascites. Palpable hepatomegaly noted on exam. ALT, AST, and ALP levels within normal limits. TBIL ~2.2. INR ~2.0. Albumin ~2.1. Platelet level at 900s. Laparoscopic examination of the liver showed hepatomegaly but without sclerosis, nutmeg findings, nor abnormal vascular findings. 12cm uterine mass was removed with a pathology report confirming leiomyoma. Ascites fluid analysis showed high SAAG and low protein concerning for sinusoidal process, and no malignant cells were seen. Venography showed severe hepatomegaly with near-complete occlusion of the intrahepatic IVC. Peripheral blood analysis revealed a diagnosis of JAK2(+) MPN. The patient underwent DIPS + IVC stenting with a decrease in the portosystemic gradient from 13 to 8 mmHg. Medical therapy consisted of anticoagulation and hydroxyurea for MPN. The patient was placed on a list for liver transplantation.

Discussion: The disease duration and severity were consistent with subacute/chronic BCS, given its insidious onset with a few months of disease progression. This is also exemplified by the abnormal liver synthetic function with normal transaminase levels. The patient likely may have had early cirrhotic changes, though unfortunately a TJ liver biopsy could not be done due to the inability to identify/cannulate the hepatic veins. The patient had various potential etiologies for her BCS. The most prominent was her thrombocytosis and subsequent diagnosis of MPN which has been commonly associated with BCS. Her recent pregnancy likely played a role as well, considering that obstetric causes such as OCP usage, pregnancy, and recent deliveries are associated with up to 20% of BCS cases. 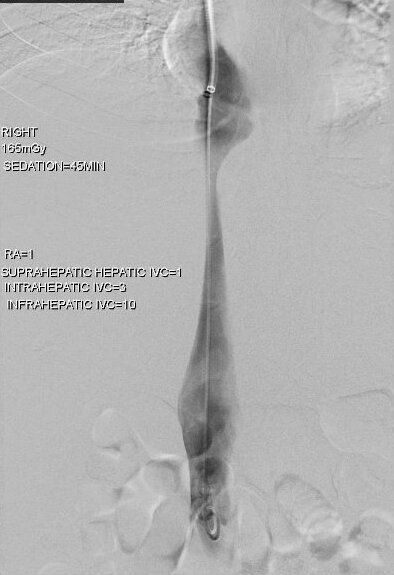 Figure: IR inferior venacavagram: High-grade stenosis at the intrahepatic segment of the IVC