P2887 - The Presentation of Hepatic Amyloidosis 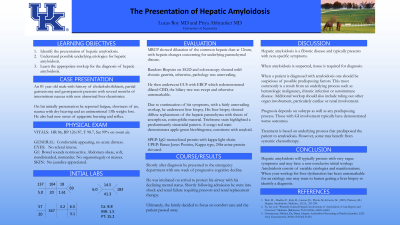 Introduction: Amyloidosis is a disorder characterized by the abnormal deposition of proteins into bodily tissue. This causes changes to both organ structure and function. Amyloidosis has a wide variety of presentations which makes it a difficult diagnostic encounter.

On his initially presentation he reported fatigue, shortness of air, nausea with dry heaving and an unintentional 13lb weight loss. At this time MRCP showed dilatation of the common hepatic duct at 12mm, with hepatic changes concerning for parenchymal disease. He returned one month later with worsening elevations in alkaline phosphatase, bilirubin and creatinine. EGD showed mild chronic gastritis otherwise pathology was unrevealing. He then underwent EUS with ERCP which re-demonstrated dilated CBD, the biliary tree was swept and otherwise unremarkable. Random colon biopsies were without pathologic abnormalities. Due to continuation of symptoms with a fairly unrevealing workup he underwent liver biopsy. His liver biopsy showed diffuse replacement of the hepatic parenchyma with sheets of amorphous, eosinophilic material. Trichrome stain highlighted a predominantly sinusoidal pattern. A Congo red stain demonstrates apple-green birefringence, consistent with amyloid.

Discussion: Amyloidosis consist of variable etiologies and manifestations. This case is important as it shows that hepatic amyloidosis typically presents with very non-specific symptoms and when an extensive workup has been unremarkable, amyloid should be considered. When a patient is diagnosed with amyloidosis, clinicians should be suspicious of possible predisposed factors. Amyloid is most commonly a result of an underlying process such as hematologic malignancy, chronic infection or autoimmune disease. Tissue is required for diagnosis. After diagnosis, further workup should include investigating possible underlying conditions and ruling out other organ involvement, particularly cardiac or renal involvement. Prognosis depends on subtype as well as any predisposing processes. Those with GI involvement typically have demonstrated worse outcomes. Treatment ideally includes identifying underlying processes and treating appropriately. However, others may be considered for chemotherapy or stem-cell transplant.