Case Description/Methods: 70 yo F with DM, obesity, HTN, HLD presented to the hospital for abdominal pain. She was found to be septic with acute renal and liver failure and hemotlytic anemia. A noncontrast CT demonstrated a focal area of mottled gas within the left hepatic lobe, 3.2x3.7x3.2cm suspicious for abscess, with associated liver nodularity. She was started on IV aztreonam and vancomycin due to penicillin allergy, and underwent immediate percutaneous aspiration with drain placement. Following this, there was noted resolution of hepatic gas on follow up imaging 24 hours later. Blood cultures from admission resulted with C. perfringens prompting the addition of clindamycin with discontinuation of vancomycin. Within days, her labs and vitals improved, and she was downgraded and discharged with the hepatic drain.

Discussion: C. perfringens, a gram-positive spore forming anearobic bacillus, is a part of the normal microbiota of the human bowel. Gas forming pyogenic liver abscess are uncommon, ~7-25%, and most often are due to Klebsiella, unlike in this case. Risk factors for C. perfringens septicimia include elderly, poorly controlled DM, cirrhosis, and malignancy. Typical clinical features include fever, abdominal pain, jaundice, liver lesion, and positive blood cultures. Intravascular hemolysis also supports C. perfringens. Hyperbilirubinemia is due to both toxin-inducing hemolysis and local tissue destruction. In this case, hyperbilirubinemia was complicated by her underlying cirrhosis and will likely persist to some degree beyond the abscess resolution. Mortality ranges from 70-100%, but highly dependent on time of diagnosis and initiation of treatment. Once diagnosed, treatment should be initiated with IV high dose penicillin and clindamycin for toxin synthesis suppression, and source control with either percutaneous drainage or surgical debridement if there is signs of rupture or peritonitis. Hyperbaric oxygen therapy is utilized if there is a poor response to initial management or are nonsurgical candidates. The sooner treatment is begun and as in this patient, the higher the likelihood the patient will survive. 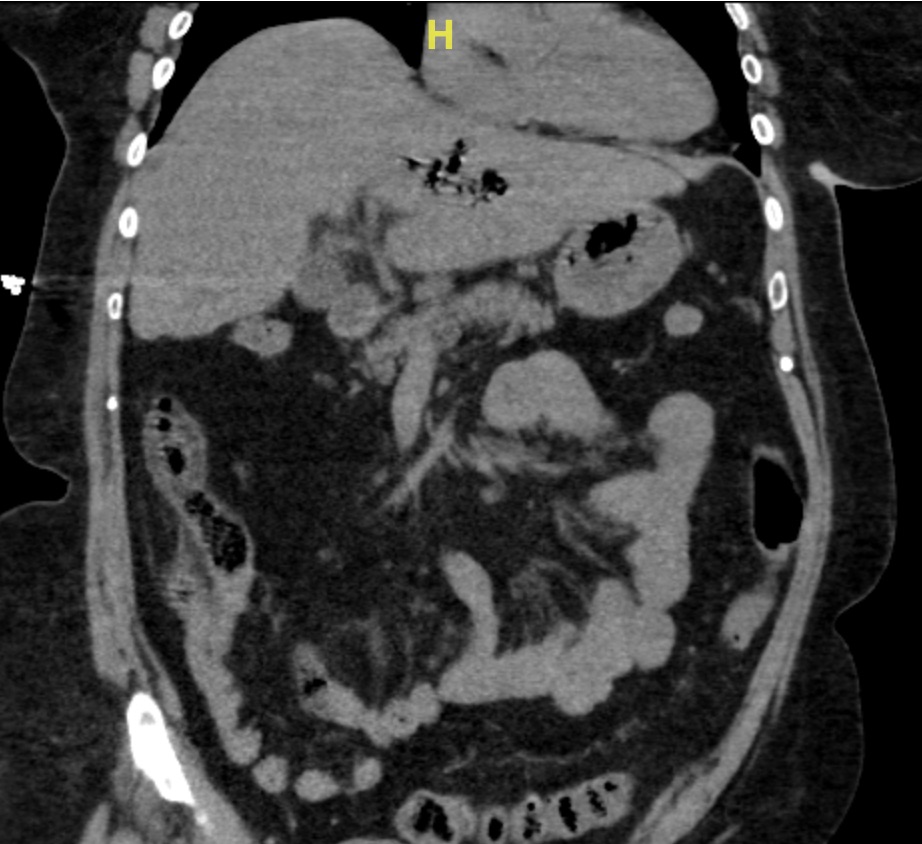 Figure: Noncontrasted CT of the abdomen and pelvis with focal area of mottled gas within the left hepatic lobe measuring 3.2 x 3.7 x 3.2 cm with nodular liver contour, this was prior percutaneous aspiration and placement of hepatic drain.