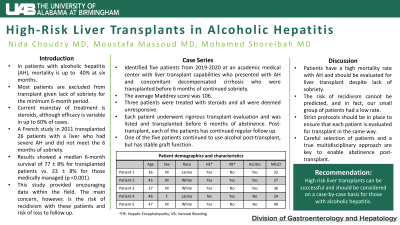 Introduction: The mortality of patients identified with alcoholic hepatitis (AH) is roughly 40% at six months. Historically, this diagnosis was considered a contraindication for a liver transplant (LT), given lack of sobriety for the minimum 6 months. Data is emerging regarding the utility of LT in highly selective patients with AH, especially those that are not responsive to medical management. This case series aims to identify patients that received a LT before 6 months of sobriety and to look at outcomes.

Case Description/Methods: We identified five patients from 2019-2020 at an academic medical center with LT evaluation and transplant capabilities who presented with AH and were transplanted before 6 months of sobriety. Four were men and the overall average age was 42. The average MELD score on admission was 33.8 and the average Maddrey score was 106. Three were treated with steroids prior to transplantation and each was deemed to be steroid unresponsive. Patients underwent rigorous transplant evaluation, particularly addiction medicine and social evaluation. One of these measures included the Stanford Integrated Psychosocial Assessment for Transplant (SIPAT). Each of the patients listed had a SIPAT score ranging from 15-38, placing them in the “good” and “minimally acceptable” candidate categories for listing. Post-transplant, each of the patients has continued regular follow up. These visits include basic labs and phosphatidylethanol testing to determine sobriety. Four have continued to maintain their sobriety, and the last experienced recidivism. This patient has been set up with both an addiction medicine counselor and group peer recovery program and follows with them regularly. Each patient has good graft function as evidenced by normal liver function tests. The patient with recidivism has had some elevated liver enzymes, likely related to alcohol use; however, this was transient and has since resolved.

Discussion: Our case series aims to highlight the fact that high risk LTs can be successful and should be considered on a case-by-case basis. Given that these patients have a high predicted mortality rate, they should be worked up for a possible LT irrespective of sobriety. The risk of recidivism does not correlate with the 6 month sobriety period, and in fact, our group of patients had a low rate of recidivism. While this topic remains controversial, we hope that centers begin to revise their procedures and evaluate patients individually to identify those that would benefit from an early transplant.