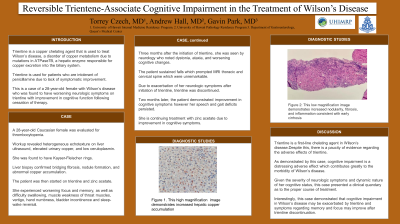 Introduction: Trientine is a copper chelating agent that is used to treat Wilson’s disease, a disorder of copper metabolism due to mutations in ATPase7B, a hepatic enzyme responsible for copper excretion into the biliary system. Trientine is used for patients who are intolerant of penicillamine due to lack of symptomatic improvement. This is a case of a 28-year-old female with Wilson’s disease who was found to have worsening neurologic symptoms on trientine with improvement in cognitive function following cessation of therapy.

Case Description/Methods: A 28-year-old Caucasian female was evaluated for thrombocytopenia. Workup revealed heterogeneous echotexture on liver ultrasound, elevated urinary copper, and low ceruloplasmin. She was found to have Kayser-Fleischer rings. Liver biopsy confirmed bridging fibrosis, nodule formation, and abnormal copper accumulation. The patient was then started on trientine and zinc acetate. She experienced worsening focus and memory, as well as difficulty swallowing, muscle weakness of throat muscles, vertigo, hand numbness, bladder incontinence and sleep-wake reversal. Three months after the initiation of trientine, she was seen by neurology who noted dystonia, ataxia, and worsening cognitive changes. The patient sustained falls which prompted MRI thoracic and cervical spine which were unremarkable. Due to exacerbation of her neurologic symptoms after initiation of trientine, trientine was discontinued. Two months later, the patient demonstrated improvement in cognitive symptoms however her speech and gait deficits persisted. She is continuing treatment with zinc acetate due to improvement in cognitive symptoms.

Discussion: Trientine is a first-line chelating agent in Wilson’s disease. Despite this, there is a paucity of evidence regarding the adverse effects of trientine. As demonstrated by this case, cognitive impairment is a distressing adverse effect which contributes greatly to the morbidity of Wilson’s disease. Given the severity of neurologic symptoms and dynamic nature of her cognitive status, this case presented a clinical quandary as to the proper course of treatment. Interestingly, this case demonstrated that cognitive impairment in Wilson’s disease may be exacerbated by trientine and symptoms regarding memory and focus may improve after trientine discontinuation 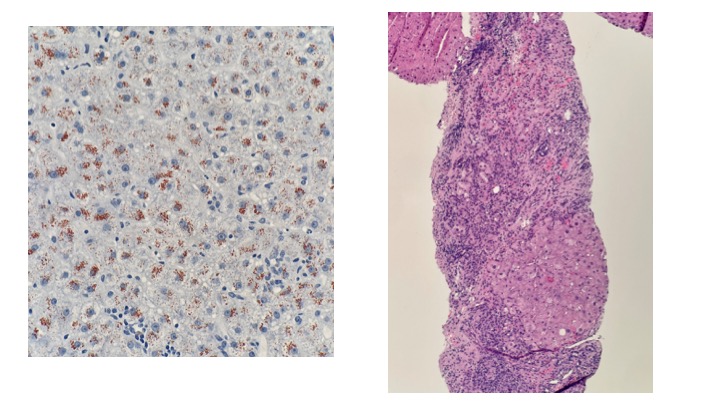