P2982 - A Case of Hydroureteronephrosis Secondary to an Intragastric Balloon 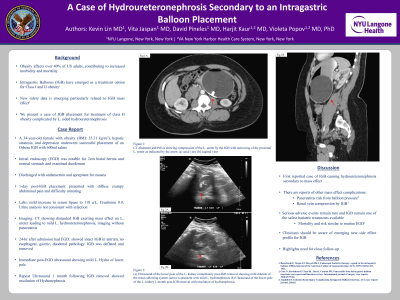 Introduction: Obesity affects over 40% of US adults, contributing to increased morbidity and mortality through associated comorbidities. Lifestyle modifications, medications, and bariatric surgery have traditionally been the therapeutic approaches to obesity. However, intragastric balloons (IGB) have also emerged as a treatment option, especially for people with class I or II obesity. New safety data is being reported for IGB. We present a case of a IGB placement for treatment of class II obesity, complicated by left (L.) sided hydroureteronephrosis.

Case Description/Methods: A 34-year-old female with obesity (BMI: 35.31 kg/m2), hepatic steatosis and depression underwent successful placement of an Orbera IGB filled with 600ml normal saline. Initial endoscopy (EGD) was notable for a 2cm hiatal hernia, normal stomach and examined portions of the duodenum. She was discharged with aprepitant and ondansetron for nausea. The patient presented one day later with diffuse, crampy abdominal pain and difficulty urinating after IGB placement. Initial labs were notable for a mild increase in serum lipase to 118 u/L. CT imaging showing a distended IGB exerting mass effect on the L. ureter leading to mild left hydroureteronephrosis (Fig 1a,b). Imaging was not consistent with pancreatitis. She denied any flank pain, urine analysis was negative for infection, and her creatinine was 0.9mg/dl. She did not improve with conservative management and 24 hours after admission underwent an EGD. Endoscopy revealed clear gastric fluid and an intact IGB in the antrum of her stomach. The IGB was deflated and removed. The immediate post-EGD ultrasound showed mild hydronephrosis of the lower pole of the L. kidney (Fig 2a). The patient’s difficulty urinating resolved, and she was discharged. Repeat ultrasound one month following IGB removal showed resolution of hydronephrosis (Fig 2b).

Discussion: To our knowledge this is the first reported case of an IGB causing hydroureteronephrosis secondary to mass effect. However, there are reports of other mass effect complications due to IGB. Risk of acute pancreatitis in IGB is thought to be from pressure from the balloon and distended stomach causing direct pancreatic injury. Renal vein compression by IGB has also been described. While serious adverse events are rare and IBG remain one of the safest bariatric treatments available, this case underscores the need for further research on the side effect profile of IGBs and close follow-up after balloon placement. 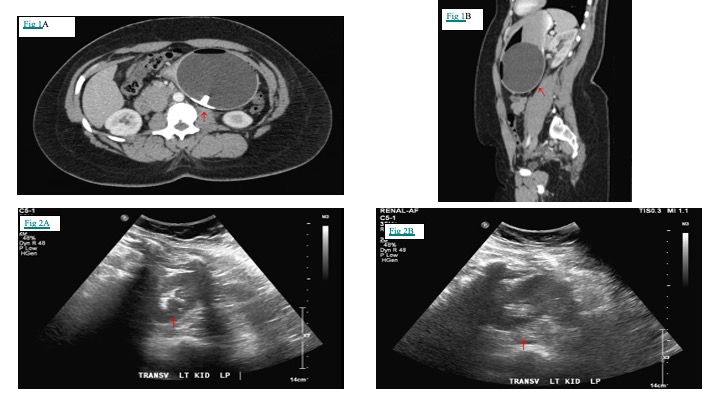