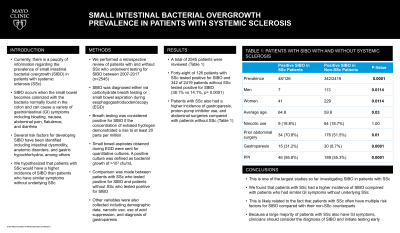 Introduction: Currently, there is a paucity of information regarding the prevalence of small intestinal bacterial overgrowth (SIBO) in patients with systemic sclerosis (SSc). SIBO occurs when the small bowel becomes colonized with the bacteria normally found in the colon and can cause a variety of gastrointestinal (GI) symptoms including bloating, nausea, abdominal pain, flatulence, and diarrhea. Several risk factors for developing SIBO have been identified including intestinal dysmotility, anatomic disorders, and gastric hypochlorhydria, among others. We hypothesized that patients with SSc would have a higher incidence of SIBO than patients who have similar symptoms without underlying SSc.

Methods: We performed a retrospective review of patients with and without SSc who underwent testing for SIBO between 2007-2017 (n=2545). SIBO was diagnosed either via carbohydrate breath testing or small bowel aspiration during esophagogastroduodenoscopy (EGD). Breath testing was considered positive for SIBO if the concentration of exhaled hydrogen demonstrated a rise to at least 20 parts per million. Small bowel aspirates obtained during EGD were sent for quantitative cultures. A positive culture was defined as bacterial growth of >105 cfu/mL. Comparison was made between patients with SSc who tested positive for SIBO and patients without SSc who tested positive for SIBO. Other variables were also collected including demographic data, narcotic use, proton pump inhibitor use, and diagnosis of gastroparesis