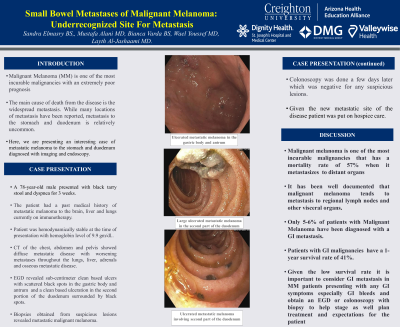 Introduction: Malignant melanoma (MM) is one of the most incurable malignancies with an extremely poor prognosis. The main cause of death from the disease is the widespread metastasis. While many locations of metastasis have been reported, metastasis to the stomach and duodenum is relatively uncommon. We report a patient with a history of MM who presented with melena and was found to have a stomach and duodenum metastatic melanoma during upper endoscopy.

Case Description/Methods: A 78-year-old man with known history of metastatic melanoma to the brain, liver and lungs, currently on immunotherapy, who presented to our emergency department complaining of black tarry stool and dyspnea on exertion for 3 weeks. Patient denied any history of GI bleeding before and never had upper endoscopy. Patient was hemodynamically stable at the time of presentation with hemoglobin level of 9.9 gm/dl. Initially CT of the chest, abdomen and pelvis showed diffuse metastatic disease with worsening metastases throughout the lungs, liver, adrenals and osseous metastatic disease. Given reported ongoing melena we decided to proceed with EGD. EGD revealed sub-centimeter clean based ulcers with scattered black spots in the gastric body and antrum (image 1) and a clean based ulceration in the second portion of the duodenum surrounded by black spots (images 2&3). Biopsies obtained from suspicious lesions revealed metastatic malignant melanoma. Subsequently a colonoscopy was done a few days later which was negative for any suspicious lesions.

Discussion: Malignant melanoma is one of the most incurable malignancies that has a mortality rate of 57% when it metastases to distant organs. It has been well documented that malignant melanoma tends to metastasis to regional lymph nodes and other visceral organs; however, only 5-6% of patients with MM have been diagnosed with a GI metastasis. Such patients have a 1-year survival rate of 41%. Given the low survival rate it is important to consider GI metastasis in MM patients presenting with any GI symptoms especially GI bleeds and obtain an EGD or colonoscopy with biopsy to help stage as well plan treatment and expectations for the patient. 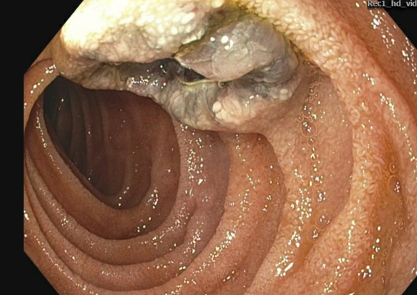 Figure: Large Ulcerated metastatic melanoma in the second part of the duodenum