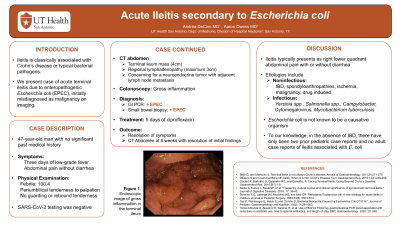 Introduction: Ileitis is classically associated with Crohn’s disease or typical bacterial pathogens such as Yersinia spp. We present a case of acute terminal ileitis due to enteropathogenic Escherichia coli (EPEC), initially misdiagnosed as malignancy on imaging.

Case Description/Methods: A 47-year-old man with no significant past medical history presented with three days of low-grade fever and abdominal pain without diarrhea. Initial exam was remarkable for fever to 100.4 degrees and peri-umbilical tenderness to palpation without guarding or rebound tenderness. SARS-CoV-2 testing was negative. Abdominopelvic CT revealed a 4 cm terminal ileum mass and regional lymphadenopathy (maximum 3 cm) concerning for a neuroendocrine tumor with adjacent lymph node metastasis. Subsequent colonoscopy revealed gross inflammation in the terminal ileum (Figure 1). Stool PCR and small bowel biopsies were both positive for EPEC, and there was no histologic evidence of malignancy. The patient completed five days of ciprofloxacin and metronidazole with resolution of symptoms. Follow up CT six weeks later showed resolution of ileitis and lymphadenopathy.

Discussion: Terminal ileitis is isolated inflammation of the ileum without involvement of the ileocecal valve or colonic mucosa. Ileitis typically presents as acute onset of right lower quadrant abdominal pain associated with or without diarrhea and is often self-limited, especially in cases of bacterial ileitis.

Multiple etiologies have been attributed to the development of terminal ileitis. Non-infectious causes primarily include inflammatory bowel disease, spondyloarthropathies, ischemia, malignancy, and medication-induced. Infectious ileitis is most commonly secondary to Yersinia spp., Salmonella spp., Campylobacter, Cytomegalovirus, or Mycobacterium tuberculosis, among others. Escherichia coli (E. coli) is not known to be a causative organism of ileitis. Infectious diarrhea is most commonly identified by PCR testing of a stool sample for common organisms. As this is a relatively new diagnostic test, it is possible that historical cases of ileitis were caused by E. coli, but were not identified due to limitations of available testing. 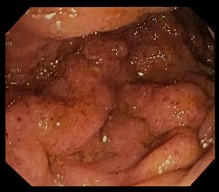