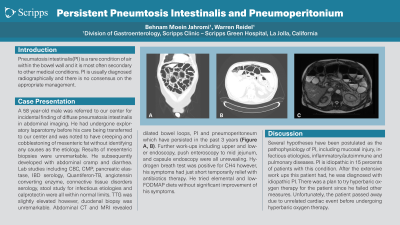 Introduction: Pneumatosis intestinalis(PI) is a rare condition of air within the bowel wall and it is most often secondary to other medical conditions. PI is usually diagnosed radiographically and there is no consensus on the appropriate management.

Case Description/Methods: A 58 year-old male was referred to our center for incidental finding of diffuse pneumatosis intestinalis in abdominal imaging. He had undergone exploratory laparotomy before his care being transferred to our center and was noted to have creeping and cobblestoning of mesenteric fat without identifying any causes as the etiology. Results of mesenteric biopsies were unremarkable. He subsequently developed with abdominal cramp and diarrhea. Lab studies including CBC, CMP, pancreatic elastase, IBD serology, Quantiferon-TB, angiotensin converting enzyme, connective tissue disorders serology, stool study for infectious etiologies and calprotectin were all within normal limits. TTG was slightly elevated however, duodenal biopsy was unremarkable. Abdominal CT and MRI revealed dilated bowel loops, PI and pneumoperitoneum which have persisted in the past 3 years (Figure A, B). Further work-ups including upper and lower endoscopy, push enteroscopy to mid jejunum, and capsule endoscopy were all unrevealing. Hydrogen breath test was positive for CH4 however, his symptoms had just short temporarily relief with antibiotics therapy. He tried elemental and low-FODMAP diets without significant improvement of his symptoms.

Discussion: Several hypotheses have been postulated as the pathophysiology of PI, including mucosal injury, infectious etiologies, inflammatory/autoimmune and pulmonary diseases. PI is idiopathic in 15 percents of patients with this condition. After the extensive work ups this patient had, he was diagnosed with idiopathic PI. There was a plan to try hyperbaric oxygen therapy for the patient since he failed other measures. Unfortunately, the patient passed away due to unrelated cardiac event before undergoing hyperbaric oxygen therapy.

Figure: Coronal (A) and Sagittal (B) CT scan of the Abdomen