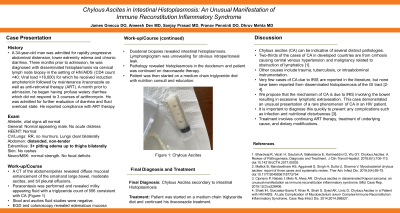 Introduction: Chylous ascites (CA) describes a peritoneal fluid collection that classically has a milky appearance that results from high triglyceride levels. It’s presence usually establishes an ominous diagnosis such as malignancy. CA as a complication of immune reconstitution inflammatory syndrome (IRIS) is rare. Here, we report a case of an HIV positive man with intestinal histoplasmosis causing rapidly accumulating CA as a result of IRIS

Case Description/Methods: A 34-year-old man was admitted for rapidly progressive abdominal distension, lower extremity edema and diarrhea. Three months prior to admission, he was diagnosed with disseminated histoplasmosis via cervical lymph node biopsy in the setting of HIV/AIDS (CD4 count < 40; Viral load >16,000) for which he received induction amphotericin followed by maintenance itraconazole and anti-retroviral therapy. A month prior to admission, he began having profuse watery diarrhea that didn’t respond to 3 courses of azithromycin, thus was admitted for further evaluation. CT of the abdomen/pelvis revealed diffuse mucosal enhancement of the small and large bowel and ascites. Paracentesis revealed milky fluid with a triglyceride count of 556. Stool and ascites fluid studies were negative. EGD and colonoscopy revealed edematous mucosa without discrete lesions. Duodenal biopsies revealed intestinal histoplasmosis. Lymphangiogram was unrevealing for obvious intraperitoneal leak. A diagnosis of Chylous Ascites secondary to Intestinal histoplasmosis IRIS was made in setting of increasing CD4 count and undetectable viral load. Patient was started on a medium chain triglyceride diet and continued his itraconazole treatment.

Discussion: CA can be indicative of several distinct pathologies. Two-thirds of the cases of CA in developed countries are from cirrhosis causing central venous hypertension and malignancy related to obstruction of lymphatics. Other causes include trauma, tuberculosis, or intraabdominal instrumentation, none of which our patient had. Few cases of CA due to IRIS are reported in the literature, but none have been reported from disseminated histoplasmosis of the GI tract. We propose that the mechanism here involved IRIS of the bowel resulting in excessive lymphatic extravasation. It is important to diagnose this quickly to prevent any complications such as infection and nutritional disturbances. Management involves continuing ART therapy, treatment of underlying cause, and dietary modifications. 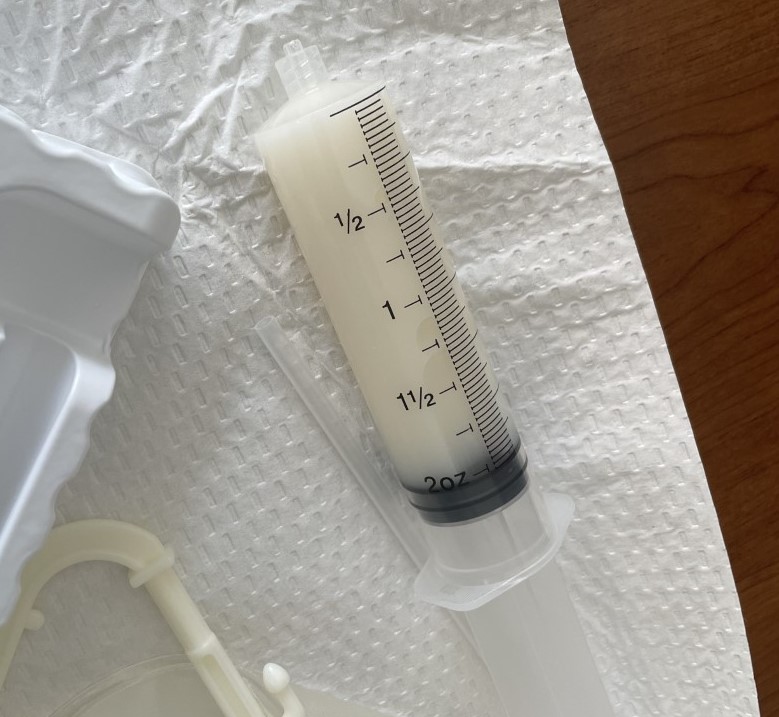