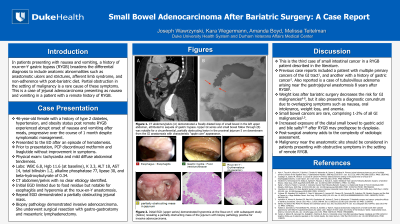 Introduction: In patients presenting with nausea and vomiting, a history of roux-en-Y gastric bypass (RYGB) broadens the differential diagnosis to include anatomic abnormalities such as anastomotic ulcers and strictures, afferent limb syndrome, and non-adherence with post-bariatric diet. Partial obstruction in the setting of malignancy is a rare cause of these symptoms. This is a case of jejunal adenocarcinoma presenting as nausea and vomiting in a patient with a remote history of RYGB.

Case Description/Methods: A 46-year-old female with a history of type 2 diabetes mellitus, hypertension, and obesity status post remote RYGB experienced abrupt onset of nausea and vomiting after meals, progressive over the course of 1 month despite symptomatic management. She presented to the ED after an episode of hematemesis. Prior to presentation, her PCP had discontinued metformin and liraglutide without improvement in symptoms. Physical exam on presentation was notable for tachycardia and mild diffuse abdominal tenderness. Labs were notable for WBC 6.8, Hgb 11.6 (at baseline), K 3.3, ALT 18, AST 14, TB 1.2, ALP 77, lipase 30, and beta-hydroxybutyrate of 0.34. CT abdomen/pelvis with no clear etiology identified. Initial EGD was limited due to food residue, but was notable for esophagitis and hyperemia at the roux-en-Y anastomosis. Repeat EGD demonstrated a partially obstructing jejunal mass, with biopsy pathology positive for invasive adenocarcinoma. She underwent surgical resection with gastro-gastrostomy and mesenteric lymphadenectomy.

Discussion: This is the third case of small intestinal cancer in a RYGB patient described in the literature. Previous case reports have included a patient with multiple primary cancers of the GI tract, and another with a history of gastric cancer. Also reported is a case of tubulovillous adenoma arising near the gastrojejunal anastomosis 8 years after RYGB. Weight loss after bariatric surgery decreases the risk for GI malignancies, but it also presents a diagnostic conundrum due to overlapping symptoms such as nausea, oral intolerance, weight loss, and anemia. Post-surgical anatomy adds to the complexity of radiologic assessment. Small bowel cancers are rare overall, comprising 1-2% of all GI malignancies. It is postulated that increased exposure of the distal small bowel to gastric acid and bile salts after RYGB may predispose to intestinal dysplasia. Malignancy near the anastomotic site should be considered in patients presenting with obstructive symptoms in the setting of remote RYGB. 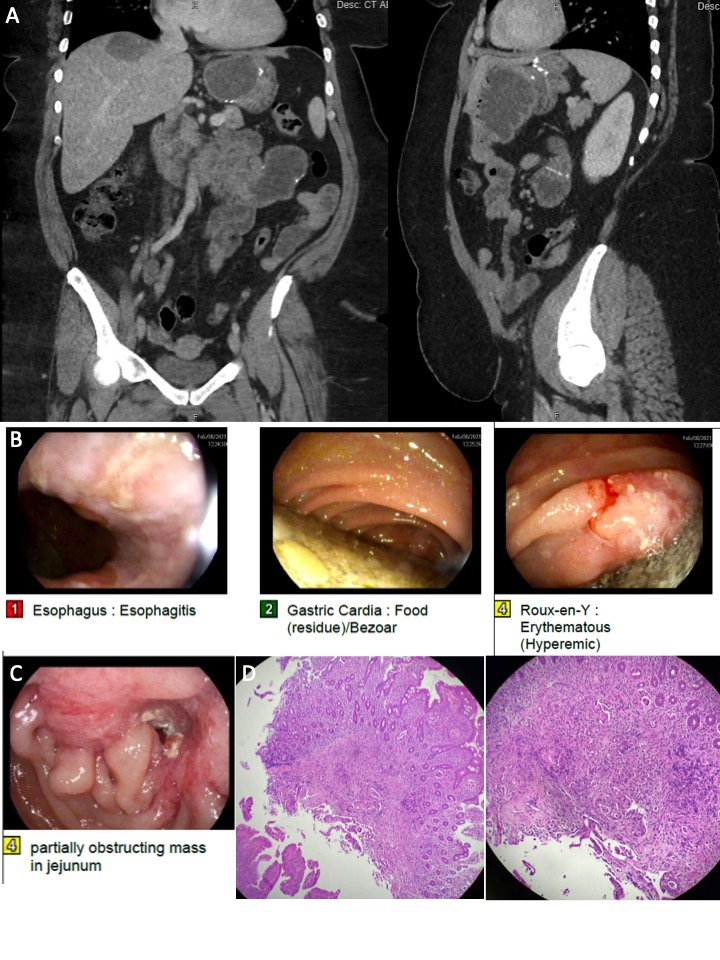 Figure: MRI liver was obtained during this admission after CT abdomen/pelvis (A) demonstrated a new liver mass. Among the findings noted on imaging was a focally dilated loop of small bowel in the left upper abdomen, attributed to sequelae of gastric bypass. Initial EGD (B) demonstrating hyperemia at the Roux-en-Y, with subsequent study (C) revealing a partially obstructing mass of the jejunum with biopsy pathology (D) positive for invasive adenocarcinoma.